Ok, so let me get this right ....  The US Department of Treasury is accusing the Kuwaiti Minister of Justice of funding terrorism.  “On March 4, U.S. Treasury Undersecretary David Cohen at a conference named Al Ajmi as a financier of Al Qaida.”  Them are some purty strong words.... With all the lawyers that the US has, if they didn't have evidence, would they say it?  Hmmmm...

The only reason I researched the story a little deeper was because the article that appeared today in the Arab Times was so cryptic and left me with so many unanswered questions – that I had to.

Just sayin’ but perhaps charity should start at home (with the Bedoon living in Taima and Sulaibiya and other areas of KUWAIT) and not overseas in areas where the “donations” might be “interpreted” as something other than honorable, charitable acts....   Resolving the Bedoon issue AT HOME would be noble, honorable, and charitable and would not lead to questions of impropriety.  But hey - that's just my 2 cents.  I'm not the U.S. Treasury Undersecretary or anything.

ABU DHABI — A Kuwaiti minister has been challenged to confirm allegations by the United States that he helped fund Al Qaida.  Kuwaiti Justice Minister Nayef Al Ajmi was accused by a senior U.S. official of promoting what was termed terrorism. 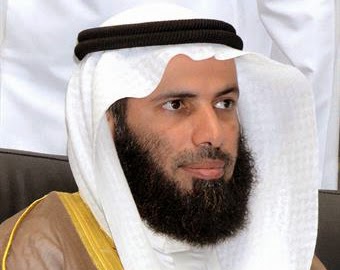 Kuwaiti Justice Minister Nayef Al Ajmi
Al Ajmi, who also serves as Islamic Affairs minister, was also said to have facilitated funds to Al Qaida’s Islamic State of Iraq and Levant as well as Nusra Front for the Defense of the Levant.

“We expect the minister to either hand in his resignation immediately or reject the accusations and sue the U.S. official,” Kuwaiti parliamentarian Nabil Al Fadel said. “Lapsing into silence will only fuel speculation and doubt.”

“The Ministry of Endowments announced it would allow non-profit organizations and charities to collect donations for the Syrian people at Kuwaiti mosques, a measure we believe can be easily exploited by Kuwait-based terrorist fundraisers,” Cohen, referring to Al Ajmi, said.

In his statement, Al Fadel quoted Cohen as saying that the Kuwaiti minister “has a history of promoting terrorism.” The parliamentarian cited Cohen’s criticism of Al Ajmi’s appointment to the two ministerial posts.
“Kuwait has become the epicenter of fundraising for terrorist groups in Syria,” Cohen was quoted as saying.
In his address to the Washington-based Center for a New American Security, Cohen became the first senior U.S. official to detail Kuwaii and Qatari help to Al Qaida militias in Syria. Cohen, responsible for financial intelligence, said the contributions were being directed to ISIL and Nusra, which could result in attacks in the West.

“Apart from their highly destabilizing role in the ongoing conflict there, these well-funded and well-equipped groups may soon turn their attention to attacks outside of Syria, particularly as scores of newly radicalized and freshly trained foreign recruits return from Syria to their home countries,” Cohen said.

The U.S. official has urged Kuwait, which uses Qatar as a waystation for contributions, to increase measures to stop funds to Al Qaida. Over the last year, the Gulf Cooperation Council sheikdom has announced steps to implement oversight over contributions to Muslim charities.

“Private fundraising networks in Qatar increasingly rely upon social media to solicit donations for terrorists and to communicate with both donors and recipient radicals on the battlefield,” Cohen said. “This method has become so lucrative, and Qatar has become such a permissive terrorist financing environment, that several major Qatar-based fundraisers act as local representatives for larger terrorist fundraising networks that are based in Kuwait.”