This is dedicated to my sister Martha.  We drove all over the hills of Virginia going "Wheeeeeeeeeeeeeeeee!"
Posted by Desert Girl at 5:04 AM 2 comments:

Alex, stay away from emotionally compromised teenaged girls.
Posted by Desert Girl at 5:03 AM No comments:

Editor's note: TED is a nonprofit organization devoted to "Ideas worth spreading," which it makes available through talks posted on its website. Naif Al-Mutawa, who was trained as a clinical psychologist, created a comic series called "THE 99," with superheroes based on Islamic archetypes. The series is coming to television in the U.S. and THE 99 heroes will be in a joint comic book this fall with Superman and other Justice League heroes.


(CNN) -- Fifteen years ago I walked out of a mosque in silent protest of the imam's sermon. Outside, the heat of the desert sun could hardly match the fire of the rhetoric being spewed forth inside.


The imam was railing against the foreign enemies of Islam and the sinners within. With every genocidal rant came an "amen" from the congregation. Some regrettably came from the heart. Others came from those on autopilot putting in their "time" at the mosque to fulfill their quota of good deeds. Still others were a tradeoff: penance for their sins, an economy of convenience that was born long before Islam and long sold as the path to heaven of other faiths.

It was not the first time I had heard terrible notions of fear and hate peddled in the name of my religion. But that day was different. That day I felt complicit. I had reached a point of intellectual critical mass where my love for my religion overwhelmed my sitting in silence any longer. As I stood up, I stared at the imam to make sure he knew that at least one person would no longer accept the recipe of his revenge.

Islam and Christianity were born in the same neighborhood under similar conditions 600 years apart.
Christianity came about at a time when harsh rulers subjugated their people, making already difficult lives nearly impossible. The people responded to the message of Jesus as they did 600 years later to the message of Mohammad. Both Christianity and Islam offered simple messages to the poor: Live by the rules and your rewards will come later.

TED.com: How Arab cultures are borrowing from western pop culture

Islam came of age at a time of open warfare between what was loosely called Arabia and the occupying Roman Byzantine Empires. It was a religion for the willing believer, further steeled by the Christian Crusades of the 11th and 12th centuries and the Medieval, Papal and Spanish Inquisitions.

Many imams today are still preaching in the rhetoric of the seventh century without regard to contemporary reality. But unlike Jesus and Mohammad, they preach not of future rewards for living a just life as Allah promised. Instead, they offer their rewards to those who devote themselves to the genocide of those who they have anointed our enemies. They prefer not to leave Judgment Day to Allah, instead they substitute themselves as a sort of lower trial court.

We are now in the Muslim month of Ramadan, a time of dawn to dusk fasting intended to teach Muslims about patience, humility, and spirituality. During Ramadan, more than a billion Muslims will congregate at their mosques.

TED.com: Comics provide a window into our world

It is finally time that all of us became more accountable for that which our children will be hearing; tiny differences setting us apart rather than celebrating those positive things that bind all good people together. If we allow small-minded men to spout fear and hate in the name of our religion, we will enable them to brainwash another generation as they did our own. And soon, the next generation will fall into a pit of dissonance. To sit by silently makes us all complicit.

As the father of five sons, I worry about who they're going to be using as role models.

I worry because all around me, even within my extended family, I see religion being manipulated. As a psychologist, I worry for the world in general, but worry about the perception of how people see themselves in my part of the world. Now, I'm a clinical psychologist. I'm licensed in New York state. I trained at Bellevue Hospital's survivors of political torture program. And I heard one too many stories of people growing up to idolize their leadership, only to end up being tortured by their heroes. And torture's a terrible enough thing as it is, but when it's done by your hero, that just breaks you in so many ways.

I left Bellevue, went to business school and started the comic book series "THE 99." THE 99 references the 99 attributes of Allah in the Koran, things like generosity and mercy and foresight and wisdom.

Fifteen hundred years after the birth of Christ, men representing the Catholic Church poured hot lead down the throats of Muslims and Jews to get them to accept Jesus as their Savior. Fourteen hundred years after Gabriel conveyed God's message to Muhammad through the Qur'an, a tiny minority of self-aggrandizing Muslims are using the lead of bullets to kill untold numbers in an unspeakable insult to name of Islam.
Today, through THE 99, this proud Muslim is using the lead of his pencil to take a stand. For all our sakes, I hope the pencil really is mightier than the sword.
The opinions expressed in this commentary are solely those of Naif Al-Mutawa.

What I DON'T need

This is the new rave:  every skinny, overly athletic (this does not pertain to me) white girl should have one.  It wasn't that long ago when all every woman in America wanted was the ass of a 14 year old girl.  And now....  alls they want is some junk in the trunk.

My family took pictures on the beach and I couldn't open my eyes. I looked link an anglo-Chinese woman.  They have been very sensitive to light lately and I wanted to go back to the doctor to have my peepers checked.

I went to a highly-recommended opthamologist here in Virginia yesterday who told me that I can never wear contact lenses again - or risk blindness.  Apparently, the viral infection diagnosed in Kuwait was karatitis brought on my lense irritation.  I'm back to glasses and I hate it.  My eyes are back to being damaged again (after wearing contacts for the past few weeks), so I have to wait a few months before they can even consider me for lasic (oh gee - another trip to the States! Wouldn't that be awful? hmmmm)

The doc actually mentioned the "B" word (combo distance and reading glasses).  oooooh noooooo, I'm not THAT old and I'm not even going to discuss it.  (Not going to mention that dirty word on my blog neither.)  Told her to talk to the hand.  Bring on the reading glasses, but those other kind - aint gonna happen.  Not now.  Not later.  Nooooooo.  Next, I'll be tying my hair up in a bun and going grey (again, never going to happen).  Not this girl.

Ok, so I know that I'm a walking pity-party.  My sister is a graceful creature who immediately looks at any situation from a unique and interesting perspective, "So, you're telling me that God saved you from becoming blind today...."   She then went on to tell me again and again how good I look in glasses (good call on the pair, The Romanian!)  She has been making me feel much better and in her generous way has offered to help.  "It's my thing..." and continues making dinner for the house full of neighborhood boys she enjoys being surrogate mom to.  Yup, I'm blessed in many many ways and I know that.  Mashallah.

I know I'm looking at it the wrong way and wallowing perhaps in self-pity, but my whole life people have commented on how pretty my (boobs) eyes are and now I feel like I'm carrying an imperfection.  It is a very stupid perception and I've got to get over myself.  I hope they can do the lasic.  It would be nice to open my eyes in the morning and see what's around me!  That would be a new experience. 'Look!  There's the clock!  There's my big bottle of Flaxseed and Omega vitamins....'
Posted by Desert Girl at 6:07 PM 10 comments:

Where I spent part of my summer vacation 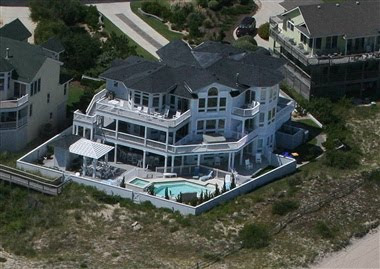 Cool, right.  Jealous? ;)
This morning, I saw dolphins playing in the surf in front of the house.  Yesterday, we saw wild horses on the beach.  There is a lighthouse within walking distance and I can see it shining through my bedroom window at night.
Posted by Desert Girl at 3:26 AM 6 comments:


This is my nephew's football combine video.
I can't believe he's such a man now.  Just 16 years ago, he was a loaf of bread in my arms - and now this.  He's turning 16 next month and just got his first car.  Mashallah, you make me proud boyyyyyy.
Posted by Desert Girl at 4:50 PM No comments:

Kuwaitia friends:
This just in from a reader who needs quotes from Kuwait.  If you are willing to help, write to her at the address below.
"I'm writing a feature about the fittest cities in the GCC for Shape magazine and wanted to get a quote from a Kuwaiti woman about what they love about their city (fitness focused - e.g "I love the numerous swimming pools as they have great facilities and are inexpensive..." or something about the parks, or the health food stores... basically one sentence highlighting a positive health benefit to the city.
If you'd be willing to be featured, I'd need your full name, age, job title and a picture.
I hope you can help and don't mind the unsolicited request - sadly I don't have any friends in Kuwait I could pester :-)
jola.chudy@gmail.com"
Posted by Desert Girl at 5:57 PM 4 comments: 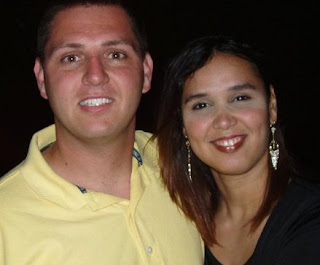 Fernanda and her husband
My friend, Nanda, passed away yesterday of cancer.  She was diagnosed with breast cancer in Kuwait in February 2009, and thought she had it beat at one point, until the discovery that it had spread to her brain.  She was a lovely lovely person, full of life and energy.  She was one of the few people I know who never had a bad word about anyone; always found (and brought out) the good in others.  She was an angel on Earth and now she's moved Home.  She died in her home country, Brazil yesterday afternoon.

Nanda had a message to me and other females I know:  Get regular mammograms and breast exams!

I will miss your smile,  your laughter, and your grace, girl.  I will never forget you.  You brightened my world and I am a better person for knowing you.
Posted by Desert Girl at 1:42 AM 8 comments: