US Defense Contractors in Kuwait - Read This

Ah, you can smell it in the air... the adrenaline is running a little higher.  The twitch of an eye.  The discreet American business development people quietly filtering through Kuwait International Airport with their heads down, as if not to attract attention. ("Who do you work for?") The increase of American guests at the Hilton....

That's right... KBOSSS is up for re-bid this year.
(More on KBOSSS to follow below) 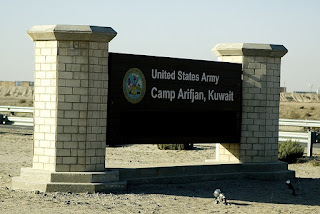 This post relates to employee rights for people working on US military contracts in Kuwait.  What you should know. What you're probably not being told.  It is relevant now, as this 5-year contract will attract more employees to Kuwait who probably have no clue what to ask for and/or expect. Relevant also for those who have been working 18 hour days (as an example) on the current contract, and have never been paid overtime.

I posted several articles previously regarding how foreign companies (non-Kuwaiti that is) handle overtime to their employees and enforcement of the Kuwait Labor Law.  To date, most companies do not comply/work in accordance with local law (even though they specifically state on ALL US Government contracts that they are).  Why not?  Because if they wrote overtime into their proposals, the prices would increase dramatically.

Also, there is a cap on overtime an employee is ALLOWED to work in Kuwait:  180 hours per YEAR (not week/month).  YEAR.  If you're working more than this, it is illegal.

Anyhoo, here are several previous posts on the Kuwait Labor Law and how it applies to folks hired to work here:

Little Diddy on the FAR and Kuwait Labor Law

Western Employees on Arifjan Sue for Labor Benefits and Win

KBOSSS is not the only US military contract in Kuwait, but it is one of the largest;  employing a majority of Western contractors.

Areas of Coverage of the KBOSSS Contract

The major functional areas of this contract include but are not limited to:

Through local and international law, the following entitlements are basic to employees working on US Military installations in Kuwait:

Article 18 Visa – In order to be badged (granted access to work on bases/camps), employees must have a valid Kuwaiti Article 18 visa.  (That means that they are covered under the Kuwait Labor Law.)


Kuwait Labor Law Overtime Stipulation:
Article 66:  Without prejudice to Articles (21) and (64) of this Law, the employer may, by means of a written order,  have workers work overtime if the necessity arises for the purpose of preventing a dangerous accident, repairing damages arising from such accident, avoiding a loss or facing an unusual work load.  The overtime work should not exceed two hours a day, a maximum of 180 hours a year, three days a week or 90 days a year.  The worker shall have the right to prove by any means that the employer required him to perform additional works for an additional period of time. The worker shall also be entitled to a 25 percent increase over his original remuneration for the period of overtime.

Combatting in Human Trafficking (CIHT) – (Federal Acquisition Regulation Subpart 22-17).  This is an “anti-slavery” requirement and it applies to fair and ethical treatment of employees; how they are paid; how they are housed, etc.  The US Government is taking a very firm stand on CIHT and this law applies to employees in Kuwait on this contract.

DBA - Western employees must be covered (by law and by contract) by Defense Base Act Insurance.  DBA Insurance is in addition to either local (Government) insurance or private insurance.  DBA is designed to provide medical treatment and compensation to employees of defense contractors injured in the scope and course of employment.  Are you covered under DBA?  Ask your employer to see their certificate with your name on it.  BAM.

In order to win the prime contract, some  bidders have (historically) cut corners by not abiding by the Kuwait Labor Law.  They do not factor overtime, 30 days paid vacation, or other stipulations which would increase their labor costs into their proposals.

Employees hired in the US may be asked to sign papers stating that they agree to work extended periods (even up to 18 hour days, 6 days a week) at a single salary rate.  These documents are not valid or legal in Kuwait as there is no jurisdiction and employees hold Article 18 visas.  They are civilians and therefore not covered under any military exemptions as service members.

Lack of Labor Monitoring of Subcontractors

Prime contractors often (again historically) do not properly monitor subcontractors (usually local vendors):  Local vendors may propose much lower prices because they are practicing illegally and not paying in accordance with the Kuwait labor Law or CIHT laws.  Subcontractors most likely utilize only TCN labor, so these employees are less likely to be able to stand up for their rights.

When employees educate themselves on the Kuwait Labor Law, and document (keep track of their accumulated overtime), they have a case in the Kuwait courts.

However, the prime contractor may choose to disregard the Kuwait Labor Law and immediately ask the employee to board a plane and leave the country without indemnity or the legally-required 90 days termination notification.  In this case, it becomes a very expensive, difficult, and lengthy process for the employee and he/she usually gives up without a fight.

With the risk of immediate termination/return to the US, employees who have accumulated and documented overtime and have any further entitlements (vacation pay, etc), may choose to wait until the end of the contract period (NOW) to contact legal representation in Kuwait; as they are in less danger of losing their jobs.

Process for Suing for Back-Pay in Kuwait

Consider also filing the case with colleagues under a class-action type suit.

I've been here 20 years.  I have talked to a LOT of lawyers.  I've asked for advice, mostly.  I have had several instances (including recently) where I have had to retain a lawyer.  It is mostly word-of-mouth.  You will find lawyers through the US Embassy's website.  (The mission of the US Embassy is NOT to help Americans with their legal problems, so don't try to go that route.)

I have reached out to a LOT of firms in Kuwait during my  years here and it is hard to find people who actually listen to you, speak the same language, and can be of assistance.  If I endorse anyone, it is because I believe in their service or product.


How Much is It Going to Cost You?

Your initial consultation should be free.  Get ready to drink some tea/coffee and make small talk.  (And please- PR people!  If you want to be remembered or have people do stuff for you - send your lawyer a little gift or whatever. Stand out and get results.)

Generally, a lawyer will take between 500 - 1000 KD for a civil labor suit of this nature and 10-15% of any settlement money.  There are also filing fees with the court that you must pay (I believe approximately 130 KD for a civil suit).

You don't HAVE to be in the country to receive your settlement.  As long as you have signed a power of attorney allowing your lawyer to act on your behalf, your settlement can be sent to you where ever in the world you are.

[Note this:  Usually refers to criminal acts where the po-po pick you up for drinking or whatever.  If a lawyer (or their associate) is EVER called out of the office, be sure that there is a fee involved (usually hourly rate); ASK before having them come out to (where ever) to help you.]

How long is it going to take?

It could take years and your court date may be set back several times based on whims.  Be patient.  It will happen.  I've never heard of a labor case being lost by any employee who was trying to fight it. You might not get the maximum amount, but the case is generally won.