I have been so busy lately that I haven't been able to post. Me sorry.

The trip over the pond was uneventful. Sheikha Minor, The Romanian, and Hickey took me to the airport and off I went on the United non-stop to DC.

I saw a cousin (Shammari dude) in the airport who stopped someone rude from cutting in line in front of me (holy crap - THAT was a first in Kuwait - and so I mentioned it to him). I said, 'Wow! Thank you. (followed by) 'Sanaeees' (the war/assistance call of the Shammar tribe). He couldn't believe that it came out of my mouth.

I sat next to a very nice 27-year old contractor who was on leave out of Iraq. He said that he and his wife will pay off their home in Texas next year. OMG, I wish I had had my shit together the way that he does when I was his age. They don't have any children but have SEVEN dogs. Jeez. Have a baby for cryinoutloud. He was very polite and articulate and I told him that I am sorry if my snoring had bothered him during the flight, but that quite frankly, I just don't give a schmidt anymore and want to get my ZZZs. He understood. I slept for 11 hours. I had no idea I was even that tired. Amazing. I love that flight; except of course for that one time when the MEAN LADY punched me. Another story.

The Romanian was here and left a few days ago. She's so funny and I miss her. She and my sister got along really well. I think they're in love. My sister's dog, Lola, also fell in love with The Romanian - following her everywhere. My nephew, Alex, kept calling her, "The Gypsy" and telling us all to lock up our money and valuables. It was the running joke of the 2 weeks. Alex was going to buy a tamborine and say, "Dance gypsy girl, dance!" Alas, we couldn't find one. Alex loved her because she "got" his humor. Alex is 14. So are we. He got the gypsy stuff from Borat - which The Romanian had never seen before, so we made her sit through it with the entire family.

Unfortuntately, the Romanian and I didn't get in too much trouble as we haven't come across any Gulf guys. Well, except for that one that we saw in the greeting card section of The Pleasure Chest. He then dashed around the corner into the "hardcore" section and we lost him. It wasn't meant to be.

We couldn't really find any decent clubs either. We went to a place where I used to go with my Al-Sabah buddy for pizza and chiante back in the day which used to be nice, but is now stinky, old and expensive. We made a halfassed attempt by driving down to K street, but everybody there looked like they were beenie boppers and so we went home. We went to 2 Middle Eastern clubs that were both lame where we played "Ugly Fun" and then went home. Snooooze. I think we both had more fun at home mixing drinks and/or drinking wine.

My sister took us to a really really great restaurant called Chimo (pronounced "chee mo"). It is Brazillian and the gaucho dudes (who were Egyptian) came around with different cuts of meat on skewers. You have a chip next to your plate and if you turn it to one color, it means "bring it on, gaucho boy" ('you may serve me meat now please'); and the other means "please stop, gaucho boy, you are hurting me" ('I don't want no more.'). Anyways, the food was fantastic and we drank really good martinis. My sister and her husband (the Abercrombie Twins) belonged there in a place full of celebrities and high class folk. I got a meat hangover (which isn't as dirty or appealing as it may sound to some of us). It huuuuuuurt. 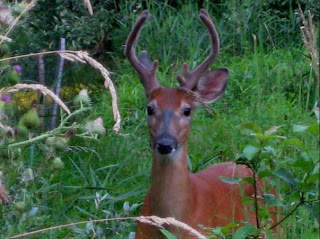 We have a gazillion deer outside the house this year and lots of fawns. It is amazing. I love them. No, we don't eat them; we feed them. They love dried corn and they won't touch the fresh stuff. I don't know why. My sister is The Deer Whisperer. They literally follow her around. Me - not so much. This is a picture of "TimBuckTwo", brother of "OneHornBuckChuck". They are part of an extended deer family/herd that feeds behind our house.

The Romanian and I took my mom and my 86 year old aunt to the beach. I ate so many crabs that I thought I would explode. Yummm. The Romanian and I went to the boardwalk at Ocean City where all the ugly, fat, unattractive people of the world converge for their summer vacations. I think The Romanian thought that it would be more like a beach in California or Miami. AS IF. Uuuuuugly. She was hungry and wanted something to eat until we saw the peeps there. Very scary. Before we left to go to the boardwalk, I called my sister and she said, "Be brave. Don't let them frighten you." Well guess what - they did.

I will have to write all the stuff down that I've been doing here. It is long and I hate this keyboard. It is hurting my pinky finger for some reason (don't go there, Purgy!). I can say that this has been an AWESOME trip and I am loving it.
Posted by Desert Girl at 11:20 PM 4 comments: