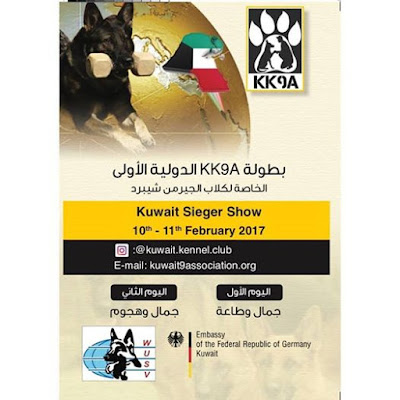 
Kuwait's Official Championship is approved by the International German Shepherd Union and under the Patronage of the German Embassy of Kuwait.

For any inquiries please contact us through Whatsapp on +965 60426733
To meet any of the Association membership, we are available every Friday from 4 pm until sunset in Kabd next to the police station.

KK9A is the only legal representative of the WUSV in the State of Kuwait.
Posted by Desert Girl at 1:42 PM No comments:

Well actually, I have a big resolution, but it won't come until the end of the year and I'm not going to share it now.

I really hope to fight off negative energy this year.  I'm still in a mood over the court case with the dude.  It is scheduled for March 7.  I don't know if I want a year with anything with him in it.  I don't need the disruption to my chi.  And ultimately, I feel he is going to commit suicide later in life when his looks and his charm fades and he's left with no job/life skills and no nationality and no one to support him because he's been a conniving taker his whole life. I don't want to feel like I'm a part of that downward-spiraling journey.

I just came back from the States and everything is good.  I haven't seen most of my friends yet and I have a lot of catching up to do.I had such a good time there.  This holiday was really great. Everything was happy.  It was hard to leave.  I miss my family so much.  I miss all the beauty there.  And people who don't stare at my ass constantly.  (Ok, ass-glances are fine, but really?  Staring at one's ass blatantly is just soooo 1950's.  Ick.  Do NOT walk through Souk Kabeer if you don't want your ass stared at.  Just sayin.)

Mikey is still at the kennel. I will get him back today or tomorrow.  Louie (Dorothy's cat) has been following me around like a dog since I arrived and has been REALLY vocal (he shouts, "hel-LOO" down the hallway if I don't give him attention).  He's so funny.  I had no idea what type of a cat he was until one of my friends showed me a photo of her cat and told me it is an Arabian Mau.  It is the same breed as Louie.  I did some research and Louie has all the character traits of the breed:  One of them is following you around, behaving like a dog.  He really isn't cat-like. He doesn't snuggle well.  He's very adaptable.  And really loyal.  I'm also not allergic to him (they say that Arabian Maus have little or no dander which is what I'm allergic to).  They've been around the region for (supposedly) thousands of years and are descended from Egyptian Maus.  They are mostly street cats and are adaptable to extreme temperatures.   AND - they sell for outrageous prices in the US (not that I could ever part with him).  Who knew?  Check out the Animal Planet video on Arabian Mau's HERE.

I got into a conversation when I dropped Mikey off at the kennel with a man who had a German Shepherd puppy.  He watched me as I walked Mikey around using the laser pointer; the ONLY training tool that works with him - no ball, no treats, but laser pointer.  The cat is a dog.  The dog is a cat.  That's my life.  The reason I whipped out the laser pointer was because of the puppy.  Mikey goes into attack dog mode when another dog is around (I know I am to blame.  Bad socializing.)  Dude (who obviously is new to the dog world) asked me if I'm a professional trainer.  LMAO.  Uh, not even remotely close.

He asks for recommendations for good dog trainers.  I reply with the same thing most of the real trainers will tell you, "YouTube."  You train the owner, not the dog.  I even recommend that people start educating themselves on puppy training BEFORE you get a dog.  Mikey fell into my life; I didn't expect to be a big-dog owner.  For that reason, he isn't socialized with other dogs and that is my fault.  At his age, he should be socialized and he isn't.  And I surround myself with trainers all the time.  I'm to blame.  Anyhow, if you take your dog to a trainer, the dog is going to listen to that trainer; not to you. When you go home, he is not going to react to you.  You need to work with him as an owner.  And that is a big responsibility.  Anyhoo, to get  Mikey's attention off of attacking little puppies, I use the laser pointer and it distracts him.  It works.  And that is another thing:  not every training method will work for every dog.  It's just like a child.  Some kids will do anything for a particular toy or treat; others won't.  You have to find your dog's thing.

Oh, and speaking of dog-things....

Remember the posts about the company that had killed all those sniffer dogs last year after they lost their contract?  No one has been brought to justice by the way and the handlers haven't been paid since last May.  They only received their releases from work last month.  I work with a dog kennel and we hired 2 of the former handlers of this company.  One of my friends with another kennel hired another other the handlers.  We all felt really sorry for them and so we did our best to make them comfortable.... Ok, so no good deed goes unpunished.  Sometimes people are just out to get what they can. And that's what happened here.  I shouldn't feel bad for trying to help, but at the same time, I hate feeling used and now 2 of my good friends feel that they were for hiring them and housing them. These guys came up with all kinds of excuses about having to take days off, not having money for taxis, and took a lot of time off during the day to "cook".  The 2 guys that my friend hired ate FOUR chickens a day; leading us to believe that they were somehow using the food to give to friends.  Who knows?  They all left with no notice at all and excuses that they were going to work for Global Services (that has some kind of a new sniffer dog contract) as handlers.  The guys we hired were afraid of the big dogs; they wouldn't handle the German Shepherds or Malinois.  It seems like they had a nice vacation with us and didn't even complete an entire month of work.  Oh well.

That was negative.  But wait, it was kinda positive because we tried to help.  Right?

Here's my philosophy on takers:   That's your test with God.  I have nothing to do with that.  I do what I think is right and good and I know that I  have done well.  That's my test.  I always give people the benefit of the doubt until they prove me wrong.  Sometimes they do.  Que sera.