I'm sorry to laugh at this but hahahahahahaha.  Greedy bastards.

If they would drop rents to make it actually liveable here, the apartments would be filled.  I pay the equivalent of a 4 bedroom house mortgage in the US every month for something that I will never own - and hey, may be kicked out of at whim because the tenancy laws are not enforced and decent people like me are terrorized by land owners with ZERO repercussion.

Kuwait!  Be like Bahrain.  You know:  That little island down the way.  Bahrain is allowing foreigners (that's right EXPATS) to buy apartments and with that you get a visa for you and 3 family members for 99 years.  Their economy is picking up.  Expats are (get this, Kuwait) HAPPY.

So let me get this right:  Citizens are BMCing about a housing shortage and meanwhile these apartments are sitting empty?  Aint that a thang.  Why?  Because even Kuwaitis can't afford to live in many of these apartments.  And even if they can, investment companies are building apartments that are SO TINY that normal sized human beings (and their children) can't live in them. I've seen apartments that are so small that I could only fit my bed in the living room.  Greed. Greed. Greed.

Kuwait would rather kick itself in the head repeatedly than to better its own economy.

KUWAIT CITY, May 30: With the fast-approaching summer and holiday seasons, the number of empty investment apartments in most parts of the country has been skyrocketing.

Statistics reveal that this number, since the beginning of the year, has increased by 17,000 and many new buildings will enter the market shortly. According to sources, the number of empty apartments increased from 20,000 to 37,000 after a huge number of expatriate workers decided to send their families back to their countries.

Many residential buildings are hunting for tenants, as owners are losing revenues. One of the main reasons behind this problem is the supply of residential apartments is much higher than the demand.
The monthly rent of a normal apartment does not cost less than KD 300, a cost not befitting the pockets of majority of expatriates currently.

The sources revealed that the investment sector witnessed a rapid growth in the past two years. According to data from PACI, there are more than 13,000 investment residential buildings in Kuwait, a number that is deemed big in the local market.

The sources indicated that they are expecting more 10,000 residential apartments throughout the country to enter the market during the second half of the year

So let me get this right?  Citizens are BMCing about a housing shortage and meanwhile these apartments are sitting empty?  Aint that a thang.
Posted by Desert Girl at 12:19 PM 8 comments:

Glad to see at least a few people taking an alternate view. 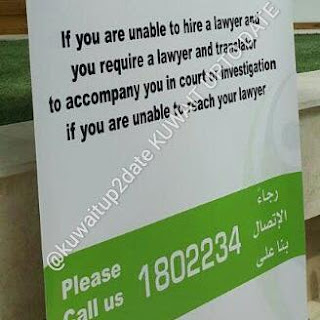 What? Not all women are prostitutes?

21 years in Kuwait. I can't even begin to tell you how many times I've been propositioned for sex for money. (And a multitude of dumbasses asking me for massages through the blog. I give them the number to Salmiya police station!)  Its disgusting.  One time, following a car accident, the guy who hit my car called me a whore in Arabic, thinking that I didn't understand.  BAM.  Instant case. (The fine for him is only 40KD, but its an embarrassment and his long-bearded father was shamed.)   My female friends have had the same problems; men showing them wads of money through the windows of adjacent cars in traffic.  Exchanging phone numbers under the guise of getting to know you and then the instant proposition.   Do these neaderathals believe that all women are prostitutes?  If one man can look at me and instantly call me a whore, what does that make his mother?  His sister? His wife?  I don't dress provacatively and even if I did - that gives no one the right to assume.

I bring this up after a small article in the Arab Times in which a woman files a case against a man for propositioning her.  Good for her.  Good for the authorities for pursuing the case.  Good for the news media for publishing it.  Because most of the time, you don't hear about it, but it is everywhere.

Arab expat offers Filipina woman KD 50 for ‘fun’
Arab Times
KUWAIT CITY, May 11: A Filipina woman filed a case against an Arab expatriate who insisted she visit him in his flat in Fahaheel area for immoral activities and promised to pay her KD 50.
The woman, who works for a domestic labor office, explained to securitymen that the suspect visited the office and requested for a housemaid. He took her mobile number for discussing details of the transaction.
However, he called her at night and urged her to have a sexual affair with him. When she refused, he visited her the next day at the office and demanded she visit his flat in Fahaheel area, promising to pay her KD 50 for sex.
She refused, requesting him to leave the office. When the suspect kept calling her mobile phone, she decided to go to the nearest police station and file a case against him.
Securitymen called the suspect on his mobile phone but it was switched off. They launched investigations to find and arrest him.

It makes me happy to see that this woman of strong character would stand up.  Doubtful that they will find him or take it any further, but just the fact that it happened and was publicized makes it worth it. Baby steps.

I rarely leave my house at night anymore for several reasons. First and foremost because of the traffic and the rage that everyone is feeling.  I don't want to "accidentally" ram my car into someone because they are an a-hole (it could happen).  Stay home, DG; Save a life.

But also because of the types of creatures that come out at night.  It is open season out there.  Friday night, I went to a wedding and I literally drove around the corner to pick up my friend (when did high heels become so uncomfortable?  I said it would never happen!).  Stuck in traffic next to 2 monkeys who propositioned me for sex with the both of them (through my closed car window).  Niiiiiice.

Went to the beach at Zor on Saturday to meet up with my friend's 16 year old Kuwaiti daughter.  She wanted to hang with me and my dog.  My understanding was that I was going to go with me, but she ended up going with friends and I met her there.  So glad that I took my car.  Did I mention she was 16?  She was wearing a leopard-print thong bikini with her diamond naval piercing thingy in. (I was wearing a summer dress.)  She took me to a not-so-secluded spot where approximately 70 young boys/men (under 20) had their cars on the beach and had music playing.  I felt like a grandmother and my dog was losing it trying to "protect" me (obviously feeling bad vibes).  We were getting a lot of unwanted attention.  I can only imagine what her bikini brought on.  EEEk.  So, I left.  But on the way to the car, I was followed by 3 monkeys not older than maybe 19.  One of them wanted to see my dog.  Ok fine.  Innocent enough. Until he told me that they could take me to another quiet spot on the beach... Then asked me for my phone number.  Me:  No, I'm married and I'm old enough to be your mother.  Monkey#1: I don't care.  Me:  Uh, I DO!...and then little dude stepped next to me and put his arm around my waist like he wanted to move in and kiss me.  Oh.No.He.Di'int!!  I gave Mikey the command.  Ears up; system armed.  Monkeys noticed and backed away.

Both incidents both verify my point that more and more "men" here seem to think that all women are prostitutes.

I don't know you and you never even saw my face.  But today I would like to thank you for being the type of citizen that I admire and respect (and unfortunately, cross paths with less frequently these days).

We were both in the same pre-op room at Mubarak Hospital, waiting patiently for our turns for outpatient surgery.  You were behind the curtain on the opposite side from me and overhead a not-very-nice conversation by a fellow citizen and her son.

We were all there for the same reasons:  pain.  We were all being treated.  We had all had to schedule our surgeries (perhaps, like in my case, months in advance).  And then arrive at the hospital and wait for hours again.  I heard you say (then, at 9:30), that you arrived at 7 am.  I arrived approximately the same time and started all the paperwork and pre-op procedures. And waited.

When my turn came, I was escorted behind a curtain by the nurses to change into a robe and wait on a cot to be wheeled into the operating room. I passed a woman in a wheelchair and smiled at her; receiving a scowl in return.   I heard the woman loudly complaining (in Arabic as I'm sure she didn't think I understood) that a foreigner was being taken before her, a Kuwaiti.  She wanted to complain to management.  You, Mr. Bu Hamad, remained quiet.  The woman (of a family name I recognize and have friends from) had no idea where I was from. I could have been a Kuwaiti also by marriage (or birth) for all she knew.

Her son (maybe my age) arrived and complained loudly that his mother was elderly and should be taken first.  There were other elderly women of all nationalities in the waiting room.  None were complaining.  Many were in wheel chairs.  One woman had a breathing tube and was obviously paralyzed; her daughter quietly sat and dabbed a tissue to her chin, lovingly, as they waited.  None of these elderly women or their companions pushed forward or complained in any way.

Finally, Mr. Bu Hamad, you said loudly from behind the curtain, that we are all the same, that we were all waiting, that we are all human with mothers and fathers and children and that we all had scheduled surgeries and were waiting our turns.  The son had no better argument than to tell you in unspecific terms that it was not your business.  To which you replied, "Who said I'm talking to you?  I'm talking to myself."

And I'm thankful to you for that.

Thank you for standing up for the rest of us and for making me proud to spend a little time in the presence of a compassionate and righteous person.  There is too much hate in the world.  People who are either in bad health or with loved ones in bad health should understand the importance of kindness (and maybe karma?).

So if anyone out there knows Mr. Bu Hamad (with a very deep voice) and can pass this along to him, I would certainly appreciate it.
Posted by Desert Girl at 3:00 PM 2 comments: