How all this technology BS ruins everything good and decent

I’ve been cyber-"checking on" a certain individual.  Bygones, but  I suspected there was stuff out there;  I just wanted to see what is on PUBLIC record – for the ENTIRE world to view. 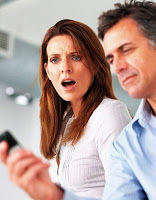 It isn't "stalking" if it is on public domain (just like he can view what I have on the blog now).  I don't comment, follow-up; nothing I do makes any difference one way or another.  What is there is there. Anyone (including me, his mother, his sisters, his brothers....) can see it.

Yes, I have put an end to him in my life;  but I needed verification, validation, closure.  I've had a nagging feeling and I wanted to know for sure.  So, now I know.

If a user name or an account starts or ends with a heart on it.... Houston, we have a problem.  His Twitter, Kik, and Viber accounts all had heart-ons. ('Are you still looking for love while you're with me?  Should I add some heart-on's too?')   I was also concerned with the amount of (seemingly anonymous) females he had added to Facebook, Instagram, and other accounts.  He also frequently changed his photos (yes, many, many photos of him -- you are NOT famous!) on his profiles (even on TrueCaller).   It was a constant cause for never-ending arguments between us.

Him:  "It is just an app. "My phone life is my private life!"  (Yes, secret, bimbo-infested "private life.")
Me:  'Really....  here's my phone (handing it to him).  You can keep it for a few days and check whatever you want to check. Talk to my friends.  Answer.  I have no secrets from someone I'm intimately involved with;  and I don't want to be with anyone who has them.  Not big ones anyways.  I can't say that people aren't "allowed" secrets.  It is just the relationship-altering ones that I'm opposed to. The internet and/or your phone is just another medium for you to meet women, regardless on how you follow-through.  You can't deny that you are meeting them, at least online, because I see you.'

To me, it is just infidelity, regardless.  He usually tried to flip-it, turning me into an overly-jealous, insecure female, adding insult to injury, "You are small minded..." (His actual words were, "You have a little mind." but that's what it translated to.)  Really?  Because I won't let you play?  Awwwwwww, habiiiiibiiiii.....

You know, it is just stupid:  Anybody can play the kids game and a whole lot of "men" (and women) are doing it; regardless of their age/education/occupation.  My married friends in Kuwait tell me about it.  My single friends tell me about it.  It's ruining a lot of lives.


Desert Girl "How-To":    CHECK on your Significant Other (SO) on the Internet:     It is easy to do.  You get an e-mail address (even one time), do a Google search, and see where it leads you.  In this case -  to a single user name on a single site. One solitary internet comment using an anonymous username.  From there, Google search by the user name...


.... and where there's smoke, there's fire:  WAABAM!  Tons of information on (this particular individual)!  Dating sites, photos of half-neked women (boobs, butts, and girls of obviously poor upbringing), video clips WITH his voice on voice-over (during a time frame when I was with him), comments on other sites, photos and comments of women who he’s chatted with dating back years.  (And you wanted ME to wear hijab??  Really???  Et furthermore, why is almost every posting you have of a religious nature when your actions speak volumes that you are NOT  a righteous man?)  Bygones.  Verification.  Code Red Alert attained.

Women just want to feel secure with the man they are with.  (Boys don't count.)

I have been followed by some of his little internet girls wanting to know more about me. I put an end to that after they left some not-nice comments.  (Tell me again why you wear hijab?  "Virtue"? "Modesty"?)   These games are ridiculous.  Blog haters got nothing on these ho's.

Sidenote:   I deleted my Tango account.  I was receiving video calls from people in Kuwait in the middle of the night.  They can call you and the camera may be on and you won't even know it.  RRRR!  Privacy!

Look at the divorce stats in Kuwait (again, I'm going to keep bringing this up).  What does it all come down to?  Everybody seems to be on a never-ending chase in this country for the next-best-thing; collecting rocks when they hold diamonds in their hands.

I've said it before, and I'll say it again:    I'm looking for a caveman who doesn't own (or want to use) a smartphone to chat with bimbos; who is connected with nature and the Earth (maybe a guy who owns a herd of camels?)  Internet pervs need not apply.

good one DG,. Cellphone is bitch.