So this week, I didn't see Stealth as much as last week.  Do you think maybe the puking made him run? LOOL.  Honestly, I don't think so.  If he was going to run, he would have left that night, but he didn't.  Even though he felt sick for 2 days because he was also feeling bad that night.  Anyhooo,  I have a hard time with slow.  I don't have much patience (The Man will tell you that).  I'm an ARIES - deal with it!  I want what I want and I want it NOW.  I'm Pushy Cat.


This is driving me crazy.  That night was a whole 6 days ago...
Poor Slaps and Romanian - they have been on the receiving end of teenage-love-drama phone calls, '... and then he said... and I'm like...what do you think I should do?'  Waaaaaaaaaaaaa - the DRAMA!  The Romanian:  "Just WAIT!"  Slaps:  "You're halfway there.  Give it time."  Don't these girls KNOW me?  RRRR.  It is so frustrating.  It's like putting a bowl of Fruit Loops in front of a 4 year old and telling her to wait.  Either all the cereal goes on the floor in a mad explosion, or cereal stays where it is and a temper tantrum ensues.
I bought a new sofa and started moving my furniture around. Then back.  Then around some more.  I stare at my phone.  I changed his ringtone just incase.  I listen to the songs I know he likes.  Then I make plans with other people that I know I won't keep.  Then I make more plans.  I go out.  I go home.  He calls; he's been busy and has justifiable reasons why he hasn't been as attentive.  He laughs.  I don't find it funny but I do the fake-girl thing so he doesn't know it. 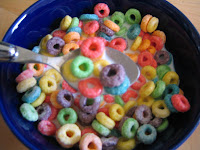 relationship based on a solid foundation....  Not rushing in.... Yada yada blah blah blah.  Do you ever get too old for this crap?  What is the cut-off age?  (Please don't tell me "never"!)

I got 2 comments while Blogger was down that didn't appear in my moderator section, so I'll re-publish them....

It's about time! I've been over here waiting for the next episode!

You're simply left with 2 options -- 1) Play the game, do the giggles, and wait it out until you feel you're in a position to become more expressive. Or 2) Throw yourself out there and spill your every thought. Of course option 2 makes you far more vulnerable and could lead to some hurt.

But first you need to figure out what kind of man he is -- does he want to chase or to be chased? Yeah, so figuring out his game before you play your own. And they say we're complex? Ha!


even the people who don't know you and who read your blog mainly due to the 'car accident syndrome' (slow down and watch) inwardly wish a happy ending for you but reading your blog is to experience your ups and downs it's frustrating (i could use other words) and fascinating to consider whether a 29? girl old woman who has so much to offer can appear so adolescent/immature in the blogoshere and/or in real life (say it ain't so)
you ask whether it's 'progress'. assuming it was not a rhetorical question - is stealth the type of man to accept a pushy woman who would rather have other people 'deal with it' than herself change?
we genuinely want 'progress' for you. progress is inevitable, it somethings shows itself soon after we admit we do not dictate its timetable hate fruit loops
but i have been known to go ballistic when captain crunch is out of stock LOL good luck

The first comment was left by American Girl who always has something useful and positive to say.

Here is my reply to Anonymous:


I started this blog for therapy – my OWN therapy – not for others. That people decided to follow along and read was just a blessing. Then, more blessings came when I got to meet some of the wonderful people behind the screen.

If there is the odd person out who reads this for the purpose of “car accident syndrome” then maybe my blog is their form of therapy. Because God knows, you could be reading something really newsworthy like the Wall Street Journal or the Washington Post and commenting on current events that really matter. Is it more “adolescent” for me to write about day-to-day occurrences from my perspective, or someone to read it, form an judgement, and comment on it?

This is my journey. Some parts fact, some parts fiction. (Yes, I say it is so!) I’m holding onto a youthful philosophy (call it “adolescent” and “immature” if you will) because that’s who I am. I look around me and see people my own (real) age and wonder about their thought process. Is it more mature? Is that better? How many relationships have those people built on a seemingly “mature” outlook/process and how many of those relationships have failed? How many divorces? There’s so much over processing and over analyzing!

I hope, I hope, I hope, I can hold onto youthful exuberance. These past few weeks with Stealth have made me feel like a teenager. Bring on the adolescence! I love it and God what a blessing to have that feeling.

Should I change? Why? Why should I try to fit into someone else’s box?

Most of the people who fit into the boxes bore the living shit out of me. I’m the square peg who doesn’t want to conform to the round hole.