I love that the Bidoon are FINALLY getting global coverage!!!  MASHALLAH!
(Photos from various media sources) 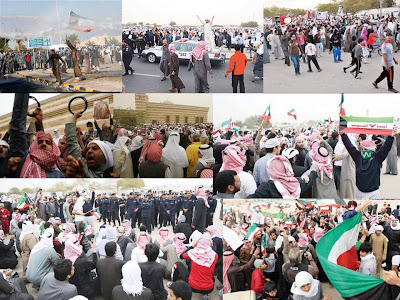 KUWAIT: Hundreds of stateless Arabs demonstrated for the third day running yesterday to press for basic rights and citizenship. Up to 300 protesters took to the streets in Jahra and around 200 demonstrated in Sulaibiya, and the two protests remained peaceful unlike the previous two days. Stateless Arabs, who are locally known as bedoons, claim entitlement to Kuwaiti citizenship, but the government calls them "illegal residents".

MPs made contradictory statements on the issue yesterday as National Assembly Speaker Jassem Al-Khorafi bluntly told them that demonstrating is not the right way to get their rights. Khorafi told reporters that HH the Amir would study the grievances, but urged the demonstrations to cease. Khorafi also denied that authorities overstepped their bounds. The interior ministry yesterday denied in a statement that any protesters had died as a result of injuries. It said some protesters suffered slight injuries that were treated on the scene, while others were taken to hospitals where they are recovering.

Asked whether the government had failed to resolve the file of bedoons, Khorafi said: "I do not doubt that we were all late in the treatment of this subject and thus encouraged those who do not deserve to claim rights of others. I think that there is a class of beneficiaries who had been wronged and were lost among those who deserve and others who do not deserve .. but I think the keenness of everyone to solve the problem and give everyone his rights would lead to the solution of the problem," he added.

A number of MPs, meanwhile, filed a request that part of a regular session of the Assembly on March 8 be allocated to debate and approve draft laws granting bedoons their basic rights. Opposition MP Hassan Jowhar said he had information that a number of bedoon detainees were tortured by police and some were taken to the military hospital for treatment. Jowhar also said that security forces stormed homes of some bedoons and advised the interior minister not to deal with bedoons with violence and urged the protesters not to attack security forces. The lawmaker accused the government of being responsible for the problem because it has refused to cooperate with the Assembly to resolve the issue.

Liberal MPs spearheaded by Adel Al-Saraawi stressed that granting nationality is a sovereign issue and cannot be obtained through protests. The National Action Bloc condemned resorting to violence and expressed surprise that the protests came after the government set up a special body to propose solutions to the issue of bedoons. The bloc also said that various government agencies like the ministries of health and education and the Zakat House are providing necessary humanitarian aid to the bedoons.

The bloc said in a statement that public interests requires that all should wait until the new authority on bedoons proposes solutions to the problem, especially that the body is headed by former MP Saleh Al-Fadhalah, who has the trust of all parties. The bloc reiterated that granting Kuwaiti citizenship must be done in accordance with Kuwaiti laws and to those who prove that they are entitled to it. Rapporteur of the panel MP Khaled Al-Tahous said that the committee will hold an emergency meeting today to approve all draft laws on the civil rights of bedoons so the Assembly can debate and approve them.

Head of the Assembly's human rights committee MP Faisal Al-Duwaisan said that a number of MPs have signed a request to allocate two hours of the session on March 8 to debate and approve laws on bedoons' civil rights, including the right to free education, medical care, and jobs, besides the right to get various certificates attested. MP Musallam Al-Barrak meanwhile said that the solution to the bedoons problem is not through tear gas or violent ways but through discussing a solution with the Assembly.

The New York-based Human Rights Watch yesterday called on Kuwait to free all bedoons arrested during the protests and to find a swift solution to their problem. HRW quoted human rights activists as saying as many as 120 protesters were arrested on Friday but cited Interior Minister Sheikh Ahmad Al-Hmoud Al-Sabah as saying only 42 were held. "The bedoons have legitimate grievances about discrimination and government inaction, and the government should listen and address them, instead of attacking them and throwing them in jail," said Sarah Leah Whitson, the HRW Middle East director. "Kuwaiti authorities should look around the neighbourhood to see that violent attacks on demonstrators only fuel the protests," she said in a statement received by email.

Bedoons number more than 100,000 and come primarily from bedouin, or nomadic, origins. Most say they are stateless because they or their forefathers failed to apply for citizenship at the time of Kuwait's independence, HRW said. Currently, the Kuwaiti government obstructs the bedoons' right to civil documentation by requiring them to relinquish citizenship claims before they can receive birth, marriage or death certificates, the organisation said. "The government does not recognise their right to work, and bedoon children may not attend government schools," and they cannot press their claims to nationality before Kuwaiti courts, it said.

The bedoons claim they have the right to Kuwaiti citizenship, but the government says many of their ancestors came from neighbouring states and they are not entitled to nationality. Kuwait launched a crackdown on the bedoons in 2000, depriving them of basic rights including the right to health, education and jobs, in a bid to force them to reveal what the authorities say are their true identities. Many bedoons have no right to a driving licence, cannot get birth certificates for their babies or death certificates for the dead. They are also banned from getting their marriage contracts attested. Because of stringent government restrictions, a majority of them are living in dire economic conditions in Kuwait, where the average monthly salary of native citizens is more than KD 1,000.
More Articles:
Arab Times:  http://www.arabtimesonline.com/NewsDetails/tabid/96/smid/414/ArticleID/165841/reftab/36/Default.aspx
Alwatan Daily:  http://alwatandaily.kuwait.tt/
Human Rights Watch: http://www.hrw.org/en/news/2011/02/19/kuwait-dozens-injured-arrested-bidun-crackdown
Posted by Desert Girl at 11:09 AM

Thanks to a poster named Clunie the problems of the Bedoon have been being aired on the Guardian Live blog. Good Luck!