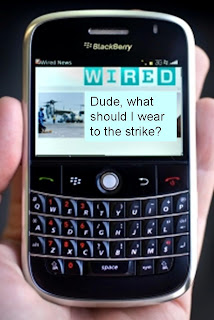 The Arab Times reported this morning that the Ministry of (mis)Communications may ban BBM messages. I mention the Arab Times because I also heard it on Radio Kuwait (Linda blah blah blah); the AT stated that it was because people may use BlackBerry Messaging (BBM) to "call for strikes." (Granted, that is probably the Arab Times' hypothesis/metaphor, but ok, I can work with that.)

Organized strikes are illegal in Kuwait. Ergo the use of water guns (ergo need for a country the size of New Jersey to actually purchase water gun trucks).

"Call for Strikes" - as in Bangladeshi workers? Unpaid street sweepers or janitors? Seriously? Do they buy and use BlackBerries when dude makes 40 dinars a month? The service is around 20 KD a month. Perhaps the Chief of Strike Organizing carries one and then communicates it verbally amongst the crowd?
There are other reasons why they would want to ban BBMs and perhapsee one is freedom of speech. You can't censor or monitor BBM chat - it's encrypted. Good on ya, BlackBerry people. You can also buy software for any cell phone for encryption (do a Google search for "cell phone encryption"), but how many people are going to do that? As it stands, it is easy for almost anyone (with a desire and another form of software) to listen into your voice comms calls and messages. Fascinating, eh?
I own a BlackBerry. Its in my closet. I hate it. No biggie for me, but what about all those 10 year old rich kids who can't live without their Crackberry (and all the potentially striking workers)?

Why not put more time and energy into other more serious matters - like the reasons why people might strike to begin with?
Posted by Desert Girl at 8:59 AM

such a ban is definitely not directed towards strikes, but rather potential "other" security risks. KSA authorities are also going to ban BBM as I've heard.

I think BB might release a non encrypted version so they wont lose the high market share in the gulf, if two countries banned BBM, other countries in the region might do the same!

It is aethetically unpleasing.. even though I left kuwait but I'd be heartbroken for the rich-10-years-old-kids with their 'berries. :(

The saudi authority were thinking of banning it, then they backed down when the the mother company in Canada refused to allow them access to their servers. Not to mention the public outrage of the banning idea to begin with.

But truth to be told, the service does present a security risk, where potetial terrorist cell can communicate at will without being monitored.

Anonymous 11:18 - Kuwait is another province of Saudi Arabia. Didn't you get the memo? :)

"... terrorist cell can communicate at will without being monitored" - they can do that already with commercially-available software on the internet.

It's obviously all about control. I haven't looked into the technical specs but I'm pretty sure that if the CIA/NSA was interested in you an arrangement could be made with RIM.

If you're a terrorist with any brains whatsoever you won't be discussing your operations on a phone anyway.

@ DG "Kuwait is another province of Saudi Arabia. Didn't you get the memo? :)" : that's why the Iraqi war started! they should take your BB, and pc for that matter ;)