Camping on Friday the 13th 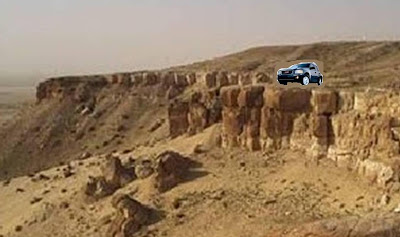 I had a great weekend. Any weekend that I get to go to the desert is a good weekend – even if I do almost get killed. Well, not really, but it was scary. First of all, the Man and I had planned to go out to the desert, bring Desert Dawg, and have a barbecue. We had planned it for some time – and stupid things always came up, so we weren’t able to go for a few weeks. We finally decided to go on Friday and went out to buy all the stuff. I thought The Man had a destination in mind. (Well, he did kinda but it turned out to be not at all what he thought.)

We got a late start and then drove and drove and drove towards Subiya. If you haven’t been out there lately – OMG! The highway towards the Boubiyan Causeway is THE place to go if you have a fast car. I can’t believe the road construction that is going on out there. The road in either direction is 3 lanes and brand-spankin-new. When/if I buy my new black-on-black Camero V8 6sp, I am definitely taking it out on that road at night: NO police and NO traffic cameras. The road is straight and the asphalt is new; ideal conditions for putting the hammer down. Top style….

I digress (as usual).

Anyways, we drove all the hellandback down to the Boubiyan Causeway, took a left and headed towards the big mosque at the circle. It was 6:00. It was dark. I was hungry and cranky. Where the hell was this mystery place? The Man was driving me crazy – and to make matters worse, he got quiet and ignored my constant complaining. Dayam – there is nothing worse than a man who ignores you while you’re bitchin at him! He had no particular spot in mind. I was pissed (American term meaning angry rather than British meaning drunk – which would have been a F of a lot better than my mood!)

I told him to turn around and head back towards Mutla’a. So we did. We got close and I kindasorta recognized a road up the ridge and then told him to turn onto a dirt path leading up to a hill. He reluctantly did – although we were driving a stupid Envoy which is really crap on sand (he didn’t want to dirty HIS car!). We drove up, found a nice spot, and started the fire.

We brought everything imaginable – except jackets. It was humid and the wind was fierce. It got really dark, really fast. There were a few camps around, but people left early and there were fewer and fewer lights around us. Even the cars on the main road became less frequent. In the distance, there were high voltage towers and it was so quiet that we could hear the sizzle of electricity, which is a really weird sound. (I wonder how much electricity is escaping from those things. Does anybody ever check? Is that normal? Do you think campers may be electrocuted? I worry.)

We took a walk around with a flashlight and it was so dark that at one point, Desert Dawg almost went over a ridge into a deep ravine. Scared the bejezus out of The Man. Thank God, I didn’t see it happen. I just saw him grab her and hug her and tell her he loves her (who would have thought he would do that when I first met him! Big Bedu man telling a little dog that he loves her – it just warms my heart!).

At around 9:30ish, we decided to leave. We packed up and headed off the top of the hill. The only problem was – it was very dark and there were no lights at all. It was also really humid – almost to the point of fog. We totally lost our bearings. The Man would stop the car, get out with the flashlight (“torch” for you Brits) and check over the hills. (I was in the car giggling because in the soft sand, he was walking kinda effeminately – had a swish thing going on. Here he was, trying to save our lives and I’m laughing my ass off because he’s walking gay… back to the story…) Ok, to a certain extent, I am afraid of heights. I am really afraid of going over cliffs in the dark. I had visions of us careening over the side of Mutla’a ridge. It wasn’t pleasant. Oh, and I had to pee and I refused to go until I got home.

Thank God, we finally found the way down. It took us an hour to find the way out. Totally freaked me out (except for the gay part and yes, that still did freak me out but in a silly way).

Sometimes when you fear for your life, people deal with the stress in different ways. Like bitching, moaning, and complaining and giggling about an effeminate swish. Go figure. Hey baby – want some fries to go with that shake? (He's going to kill me when he reads this!)

We got home, I got to pee, we ordered some kanafa (comfort food), bathed, and went to sleep.

That ceratinly was an adventure.

I wouldn't advocate reckless driving though for inexperienced fellow citizens and expatriates.