Parenting at it's very best. 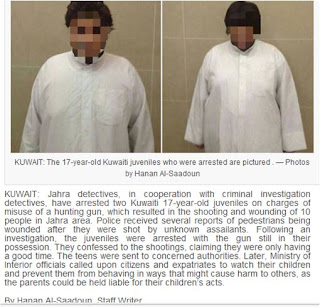 
I love how they say "misuse of a hunting gun, which resulted...."  yeah, like if you aim, squeeze the trigger, and discharge a bullet at a HUMAN that is the "result" of the "misuse."  And the kids (who would be charged as adults in the States) claimed that they were "only having fun."   What a crock of shit.

They probably shot poor people who won't/can't file cases against them.

Didn't they shoot a cleaner in the back (misuse) like 11 times (resulted) or was that another case of great parenting as well?
Posted by Desert Girl at 10:33 AM

you are absolutely right.
i got a ticket in Kuwait because the police didn't like the color of hood on my car. they were insulting people. they don't care where they post barricade. it is very insulting to live among these people.