Another weekend in Happyville

First of all, I'm sick again. That makes slightly over a month of stupid sick things.   It started right after I went to Arifjan last week where everybody was coughing and wheezing .... and hugging me.  Thaaaaaaaaaanks.  Nice to see all y'alls too.  I'm infuckted again.  It started with one eye infection, then bien sur the other, then my throat, then the coughing and sneezing.  I saw that big gynormous bottle of Nyquil at the PX too and pondered purchasing it for a split second before letting it go - cause I felt GREAT (that day).  Snap.

Anyhoo, sometime this past week I got a series of messages from Ho (first 2 letters of his last name, but it is fitting, so I'm going to call him that - and I think he'll actually like it) - my friend from Saudi Arabia who I hadn't seen since I left the States to move to Kuwait.  He was still studying there when I went.  I don't remember him being around during those days.  Did we have some kind of disagreement?  Shoot, I can't remember what I had for breakfast; how am I supposed to remember 17 years ago?  Anyhoo, instead of calling me (thanks by the way), he sent me WhatsApp messages to tell me that he was coming to Kuwait.  Very cryptic.  When? (I thought he said Friday, but it turned out to be Thursday.)  Who are  you coming with? (I thought he was coming for work.)  "Can I stay with you?  Will you pick me up from the airport?"  Wait a minute... I'm confused.... "Sure. When?"  (I don't want to be rude to someone I haven't seen in 17 years....After all, I have repeatedly invited him to Kuwait since I've been here.  Dude, 17 years and less than a week's notice - puhleeeeeze!)  There seems to be some kind of a lag/delay between here and the Kingdom on WhatsApp.  Why didn't I just call him?  I don't know.

Dude, why is it everybody is under the assumption that I don't have a man in my life;  and wouldn't my man be upset because another man is staying with me?  (Turns out that BuMerdas was pretty pissed, but that worked to my advantage.  Tee hee.)

Anyhoo, The Romanian (who he kept referring to as "Armenian" and telling a story that his wife wouldn't allow him to get a maid from the Ukraine - WTF?) and I picked him up at the airport and later took him to dinner at Pescado in Costa Del Sol.  The ambiance is amazing:  360 degree view of the Gulf Road, pretty decor - all very nice (with the exception of SCREAMING kids).   The food, not so amazing.  I was disappointed.  Very dry/overcooked.  There were also only 3 tables occupied.  (The Japanese restaurant that is right next door was completely empty.)  The wait staff stood in a line and stared at us most of the night. (Now that thar makes me just want to shout at them.)  Regardless, it was a nice evening because we were having a good time laughing and telling stories of my previous existance.

Ho talks trash but he is married to a beauuuuuuutiful Saudi woman and has 3 children and another on the way.  He's probably more innocent than he appears to be in the side mirrors.

Since I hadn't seen the Ho in 17 years, I thought that I really should have a party to introduce him to my friends.  This, with eye infucktions and brochitis.  Yeah. Ok.  So I did.  I called my trusty side-kick, Hussein, the Party Helper (available for hire BTW - write to me), and he did most of the work for me.  He's such a great guy.  He cleans, he serves, he smiles.  My friends love him and some of them even hug him at the end of the night (not just because of the refreshments either).

Most of the usual players were there with the addition of FlyBoy (a new victim).   I was trying to get him tipsy, but it didn't work..  I kept asking if he wanted to make out.  He agreed immediately, but then nothing happened.  Maybe he didn't truly understand what I was asking him.  Dunno.  He's so cute.  My Irish Cousin gave him a hard time for most of the night about FlyBoy's line of business. Cracked us all up.

Butterfly and her hubby came back from Amsterdam and  gave me salt and pepper shakers in the shape of 2 pigs humping. There seems to be a theme.... Note the little windmill and the "Holland" signature.  Just WRONG! 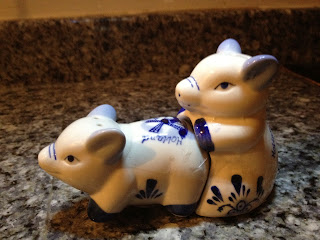 Ho sat with the "good boys" all night after my 2 other Romanian girlfriends left.  One of them was my physical trainer back in the day.  She used to be MEAN to me at the gym (I called her 'communist torturer') - especially on floor exercises.  She's all muscle even after 3 kids.  She frightens me.  The Romanian and V have been quite naughty of late and left "early" (1am) to go to yet another party until the weeeeeeeeeeeee hours of Saturday afternoon...  Bad girls, bad girls... whatchagonna do?  Whatchagonna do when they come for you, bad girls, bad girls....

Anyhoo, everybody had a great time.

Yesterday, I took Ho to Muhallab at The Palms for some simich and then off to the airport.  Then, I went to bed at 7:53pm because I'm a sick old lady.  Stealth called me to make sure I was ok.  I'm glad someone calls to make sure that I'm not dead and rotting alone in my apartment.  (Ok, so it was less than 24 hours, but still....  I'm needy when I'm sick.)

I was supposed to go to Kabd on Thursday night, but I couldn't.  Maybe I'll make it up there this weekend.  The Romanian's son is getting married on Tuesday.  I put a note about it on my "real" Facebook page, "4 more days till the big wedding!  So exciting!" and my friends are commenting like crazy, "You're getting MARRIED!!! Mabroook!"  Whaaat?  As Stella says, "Don't these people know you?"  Anyhoo, we're all set for the wedding of the century.  There will be 450 women there.  We're the only blondes. WaaaaBAM!  Looks like yet another fassssscinating week.
Posted by Desert Girl at 1:46 PM

First thing Im doing when I get to Kuwait is looking for a place that sells Pink Roses :P ....just sent you a message on Fb hope it wasnt to the "unreal Fb page" lol let me know.
P.S amazing Blog thanks for sharing you seem like an awsome person, looking forward to more Great reads.
Best Regards,
Canadianguy

Why oh why do people here love to hug and kiss you when they are sick??? We were just having this discussion AGAIN this morning as husband is sick and remembering who he works with that is sick, looking back they are the ones to shake hands hug and kiss with extra slobber. It's rude, nasty and if you call them out on it then YOU are the rude one!
Post about alghanim please,
Gail