TOKAI (Street Cleaner) Film: You should watch it 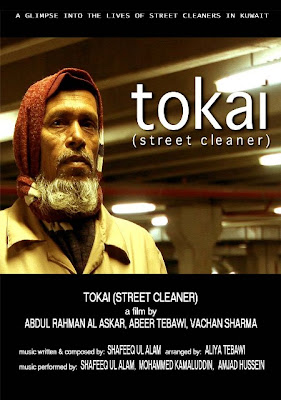 It's on YouTube.  Has been banned in Kuwait by the Ministry of Information.
Thanks for the heads-up, Ahmed.

Synopsis
TOKAI (street cleaner) is a short documentary that offers a glimpse into the lives of thousands of street cleaners who sweep the streets of  Kuwait. In a country of abundance and wealth, these men earn menial salaries, as low as $50 a month and eventually regress into the forgotten inhabitants of the Middle East.


This is a moving film.  You know that it is going on right around you, but this nails it.  These companies keep cleaners' passports, so they are in servitude.

I can see how the Ministry of Info would ban it.   Human trafficking is something that no one wants to talk about, but it exists in many countries (including the US).  The thing is:  do something about it.

I'm happy to pay these guys a little extra for doing things like taking my bags to my door or cleaning my entranceway - anything to help.

I would give to homeless people on the street (and fix them a hot meal once in a while) in the US, I do it for street cleaners here.  When I make hot coffee in the morning, I bring a cup to the cleaners in my neighborhood (because for some reason, I can never make just one cup.)

So.... here's how you can help....  give directly to street cleaners or give to charities like Operation Hope or the Salvation Army (they do operate discreetly in Kuwait and you can contact them through their international office for support).  Donate used clothing.  Drive out to Hasawi (from 6th Ring Road, take the exit after 60.  Turn left.  Go streight.).  Find poor people and hand stuff out. It's simple.  They're not so hard to find all over the country:  they wear yellow suits.

I know I am going to get mail from people saying to beware of street cleaners "they're criminals" etc. etc. There are also people out there saying that these guys make so much money off charity that they can buy their own Mercedes when they get home - yada yada (but not without their passport, right?)  Okay fine.  You have an opinion and I have my own opinion:  God gave me a brain, a heart, and judgement skills:  I use them.

By the way, incase anyone out there is wondering:  Minimum wage in Kuwait is 60 Kuwaiti Dinars per month.  Kuwait has an official 48 hour work week. Kuwait offers a universal healthcare system, but many of the laborers must take time off work to go to a hospital or clinic.
Posted by Desert Girl at 9:31 AM

I couldn't agree with you more!
This movie raises awareness about an issue that becomes the background after living here for so long...

I just wanted to say thanks for posting this. I wish more people gave a damn....excuse my language.

Evokes such emotions, more poignant with my awareness of the language. The song brings alive the sentiment in more ways than one. Indeed an extremely sad state of affairs. Change, I hope, creeps in slowly to eat into the cartel of treacherous alliance. I really do.

Kuwait is a country where 'over abundance' is an understatement. From the locals to the Western expats -- everyone has a bit more than they need. Giving a few fils, old clothes, food, etc. to these guys isn't going to break anyone, and it's so touching that you are so generous, DG. Mashallah. Not just by giving what you do, but by bringing attention (along with the facts) to their situation.

These men work in the heat, the cold, the rain, the sand and truly rely on the kindness of random strangers at redlights to give them anything -- as their salaries are rarely paid on time.

Is there anyway to get a copy of this film? Thanks!

I appreciate your efforts in sharing this banned movie. I appreciate a Kuwaiti took the effort to make this movie. I hope all Kuwaitis have the courage to watch this film.

This film was shown in the Graduate Society/ Bneid Al-Garr May 2007.

Interesting that it is banned now

Hello my name is Vachan, I was one of the directors on "Tokai (Street Cleaner)". I wanted to thank you all for your support, it is hugely inspiring.

Please continue to spread the word and discuss the issue even with those who completely disagree with you.

We have the power to change the world one action at a time. Keep doing what you. You can do it!

You know the 48 hour work week does not apply to domestic workers? They are specifically excluded.

This film makes me angry. It makes me so angry that we Kuwaitis let this happen. We are a rich country, we have more than we need, yet we don't even think about all the people that do our dirty work, the work that no Kuwaiti wants to do. We owe these poor people so much more. Kuwait is full of this modern day slavery, that exists in all our homes. It's a part of life, no one even thinks twice about what these poor people have left behind to come and live like this. The next time you see someone pick up your trash, fill up your car, or serve you in any way, say thank you, and give them a handout if you can afford it. I know most of us can afford it.

Anonymous 3:03 - For all the reasons you stated, I think that more films like this SHOULD be made and SHOULD be allowed to be shown. There is a problem. Everybody knows it, but no one is willing to come out and talk about it. Get it out in the open and talk about it then a solution can be determined.

Thanks Desert Girl for this platform for discussion. What other issues should be discussed? I'm looking for ideas for a future film (fiction or documentary). This questions is open to everyone on the blog.

hello can you please provide me with contact info of the filmmakers, our university is hosting an event about the marginal labors in Kuwait, we are planning on screening this film and would love to have the filmmakers as speaker.