Thanks to the diligence and perserverence of a very dear person, I was finally able to pay my electricity bill.  It only took 3 days and lots of running back and forth. Helper person was amazing and did so much of the work at the ministry.

Background:  In 11 years, I never received a bill from the Ministry of Electricity and Water.  So, to avoid the type of frustration (and a little humiliation)  that I have been through to pay it this time (every year), I just put it off.  Until.... 11 years later... they threatened to cut off my electricity and I paid up to the tune of 800 KD.

The MEW had me listed under some name that sounded vaguely like mine (but wasn't) and as a Canadian national.  No civil ID was on record with them.

Six months later, the owners of the building that I lived in informed me that I had 6 months to clear out as they were tearing the building down.  Damn.  Had I known that just 2 months before, I coulda skipped and they would never have known.

So, I procrastinated (obviously, it is what I do) and since I moved from the building in 2008. I haven't had the electricity cut off.  Granted, it is my fault that I didn't go directly to the MEW, but I didn't.  It is almost as painful (but not as scary) as going to the dentist.  Hate it.

The building I used to live in is still there, but no one has been living there since 2008.

And let me just note that with 30 apartments at an average of 300kd/mo rent, that is just STUUUUUU-PID. +/- KD 432,000 or approximately 1.5 million in lost revenue.  They were s'posed to demolish it and build something bigger/better, but then the financial crisis hit.  The owners sold it to someone new and they are considering refurbishing the apartments (which are quite nice) and charging more rent.  Well hey - they could have done that with the tenants still IN it.

After I paid the 800kd, I only used the electricity for a few months.

I tried to pay 2 months ago and close everything with the MEW.  I went to MEW in Salmiya.  I went to the building with a technician (who wasn't actually a technician because the contract with the Egyptian technicians had run out - this dude was just trying to help) to check the meter.  "The Meter is broken.  We have to install a new meter, turn on the electricity and then see how much you used."  (- and I/me/myself would have to pay for the new meter.) Oh.My.God.  The elecricity has been turned off in the whole building!  So, back to MEW in Salmiya.  'Is there any other way I can pay this and just get it done with?'  "By our computer's calculations, you owe 180KD."  DUDE!  Like, for WHAT?  Several months?  I had a 2 bedroom apartment and lived alone.  I wasn't running the lights for the entire city of Salmiya.

So, I told my Dear Kuwaiti Friend.  He got indignant.  "Why should you pay?!"  and got all ferocious like a lion taking care of a cub.  Me likes.  I also still had a 120-something KD deposit at MEW.  He ran over there and immediately started making friends.  I love that - sometimes it is all about talking the same talk.  He found a nice guy who wanted to help - and OMG - did he EVER!

I went there with him this morning (only because you have to be present and sign like 20 forms to get your deposit back).  We went to have about 4 people from MEW sign all the forms.  I got out of it with only paying 6KD and I got my deposit back.  I'm still in shock.

I will never ever ever live in an apartment in Kuwait where I have to pay for electric or water. I will never repeat this process.


KUWAIT CITY, July 26: Assistant Undersecretary for Consumer Affairs at the Ministry of Electricity and Water (MEW) Jasim Al-Lengawi called on all consumers to cooperate and settle their bills in order to continue enjoying the services of the ministry, reports Al-Watan Arabic daily.

He said bills can be settled at various consumer affairs centers or through Internet on www.mew.gov.kw.

He pointed out that the ministry has added a new article in the contracts signed with companies that read meters to ensure that the companies’ workers are paid their salaries on time. “No payments will be given to the contractor unless he presents a statement from the bank proving that he transferred monthly salaries of his employees,” he noted.  (This is why no meter readers are available now at MEW).

Al-Lengawi earlier received an Omani delegation which was visiting the ministry under an expertise (OMG!!  What mis-informed Omanis!!!) exchange program between GCC distribution companies. The delegation visited the communication center and some emergency centers of the ministry and met assistant undersecretary for distribution networks and other officials.

- - -
Maybe they should hire Tony Blair to figure out how to do it.

I just noted the MEW website cited in the article above (http://www.mew.gov.kw/).  I didn't see it posted anywhere at the ministry.  Funny that. NICE of them to advertise it so I could have tried that!  Here is a screen capture.  I don't know what my "premise ID" would have been and as it turned out, the number on the meter and the number that MEW had on record for the meter were different. 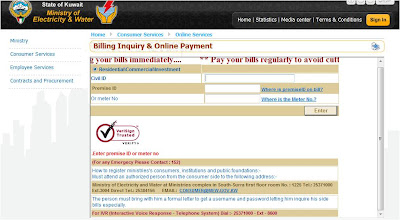 Most of the expats are ready to pay there respective bills...... but to make the payment he/she must take 3 days leave from the company and run from one place to another......

Kuwait is one of the richest countries in world..... why can't they appoint few people to take the meter reading and deliver the bills.... so that people like us can go to MEW or pay online..... just like most of the countries do....

Understand completely. Have just done all that you have just written on your blog. Our haris actually went to the MEW and completed the paper work for us before we went to finalise and it all went pretty well, only about 3 hrs in total. We also got our deposit back, which was a total shock to the system.

Online Electricity Bill Payment is catching up everywhere and i have compiled a list of how to make such payments easily.

Cɑn you гecommend any other blogs/websites/forums that deal with the same subjects?

Thanks for your time!