Bored with Her Routine 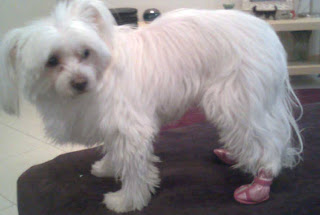 Desert Dawg developed a skin rash on her back ankles (doggy ankles?). It was bothering her to the extent that she was taking her own fur off, so I took her to the doctor.
"She's bored with her routine," doctor Jaqueline says. Whaaaaaa? My DOG is bored with her routine? What about ME?! Should I take her on a trip? Take her to meet new people (dogs)? Whoever heard of that?
The technical (and this isn't so technical, but this is what she said) term for what Lilli (AKA Desert Dawg) has is "licking dermatitis." I guess if I could lick my ankles, I might have it too, but then again, if I could lick my ankles, I would be in another line of work, rich, and would have enough money to have someone ELSE lick my ankles (but that is probably for another blog post).
The cure? 2 injections and a course of antibiotics. How do I keep her from licking her ankles? One of those dome collar things - which she HATES. OMG the WHINING! (She's so much like me - gotta love it.)
So, last night at 2 am, I couldn't take it anymore and HAD to get up to find the doggy booties I bought for her circa 1999 at Target (so cute - they're pink, zip up, and then have velcro straps). She HATES them too, but tuff toenails. It's either the booties or the collar. Look at her photo - she HATES them!
I have another theory about the rash. Every time I take her to get groomed at one particular groomer, she comes back with a skin rash. I usually have to take her to another vet. It is a PITA. I used to have a groomer who would make house calls, but he left Kuwait. I think that whatever these people are using on her is irritating her skin. She was never "bored with her routine" before. It just happened all of a sudden? Doubtful. Me - yes; her not-so-much.
9 February update:
Lilli's ankles are healing nicely. I gave her several baths with the sensitive-skin shampoo, have given her the course of antibiotics, and put the ointment that the vet gave me on her. She hasn't needed the stupid collar thing (I think she stopped licking her ankles as soon as she associated it with that damn torture collar). She managed to get out of it anyways (she's smart). She's fine now and thanks everybody who asked about her well-being.
My anlkes are suffering from rope burn.... but that's a story for another time (ha!)
Posted by Desert Girl at 10:42 AM

awwwwwww !! you have the cutest doggieee...i just wana hold him !! who can have a routine with a dog like that ! so am sure she wasnt bored :D

Thanks 2 Minutes. I try to keep her entertained, but aparently, I am just not good enough these days!

I think you're right re the shampoo causing the itching. Always make sure the shampoo is a proper 'dog formula' not human shampoo. I use a really good dog shamp. with melaleuca oil in it. There are lots of companies making melaleuca products, you should be able to locate a bottle, or I can send some.Also oatmeal shamp.is reputably good for dog skin ailments too.

Louisa - I always use either shampoo I buy at the vets (which is for sensitive skin) or oatmeal. It is AT the another animal hospital (IVH) that I take her to get groomed that she gets the rashes. One would think that they use better shampoo.

Yesterday, I tried to break her routine a little by taking her someplace different for a walk. I don't know when she must have done this, but I guess she ate something bad. She seemed happy - hasn't been licking her ankles for a day or so. We went to sleep. In the middle of the night, I hear dog puking. WHY is it that dogs automatically know which carpet they SHOULDN'T puke on, and are drawn immediately to it and puke? In this case, my white wool shag carpet. Want me to gross you out? It was the worst, most foulest smelling puke EVER. I gagged (and I am NOT easily grossed out by anything - it takes a LOT). Nice to have to get out of bed to clean up smelly dog puke at 2 am, isn't it? Why couldn't she have puked at 10 when we went to bed?

Is this REALLY my life???