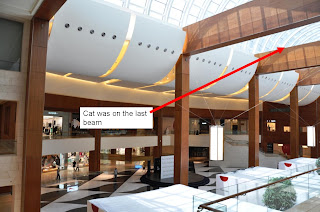 I had coffee with The Man at 360 on Friday afternoon at around 3:30. I happened to look up at the ceiling and about 100' up in the air on one of the wood beams close to the atrium glass ceiling, there was a cat walking back and forth on the beam. I'm guessing at the height - no idea how far up those beams are, but they are above the 3rd floor of the mall.

He kept walking to the end of the beam, and then back out again (above the fountain at the end), looking down to see if there was a way down, and then back again. I tried to take a photo, but he was too far away.

The Man contacted the mall security and by the time we left, there were about 6 guys standing there with walkie talkies, staring up at the cat. They seemed to be very concerned that I was taking photos. The Man told them to give up their argument - it doesn't do any good arguing with me while I'm on a mission. "SAVE THE CAT!!!"

I sent AFL an SMS explaining what was going on. I hope they went out to see - I know that the founders' home isn't too far away in South Surra.

I've seen birds in malls before - but never a cat. I don't know how he could have gotten up there. I hope someone was able to rescue him for his own sake. I think if he falls, the height would kill anyone he fell on. I wonder how long he has been up there.

Yet another freak occurrance in every day life in Kuwait.
Posted by Desert Girl at 8:42 PM

They say cats have seven lives and any way they fall they will land on their feet - even if it is on someone's shoulders or head.