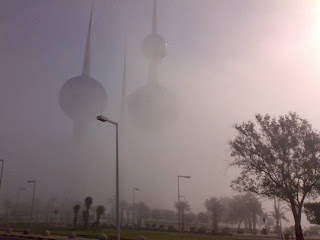 Photo Credit:  Mohannad Shaheen, Flicker
We drove back from the desert near Khiran last night (okay, early this morning - around 3 am) and experienced the most beautiful, surreal and mystical fog that I have encountered for years.  It was around the coastal areas (between Khiran and Dubaiya) and so thick in some places that people slowed down to around 40kph and put their flashers on (and I'm not just talking about the Indian guys who normally do that while driving the middle lane).  It was dense in some areas and almost a feathery water-color through the street lamps in other places.  It wasn't a high fog:  It seemed to be lingering right around the street lamps, dipping down onto the road.  It  was as if someone had intentionally placed it there, or maybe painted onto the landscape with enormous brush strokes.

I love fog and consider it an adventure to be part of,  but you don't really get to experience it around here.  We used to have a beach house in Maine close to the Canada border and there was the same kind of mystical fog there that rolled in like waves and enveloped everything into white.

I've experienced fog like that in Kuwait only 2 other times in Kuwait; although I have to say that last nights was the most beautiful and almost magical; intertwining layers; dense in some places and banded lighter areas in others.

In the desert in February, 1997 near Julai'a when the fog rolled in (the infamous "night I lost my earring"), we sat in the desert with no camps in sight (which seems very strange now if you know how many camps "pollute" the Julai'a area now) around a camp fire, with no sound... when the fog rolled in, was very strange and isolating.  The next experience came on the way back from Kabd several years ago.  It was so thick that we lost our bearings of where we were driving and even considered going back to spend the night.  All times I have experienced fog in Kuwait, it has been around 2:00 to 3:00 in the morning.

I think that the fog we get during the day is a lot different. I call it "fusty" - a combination of fog and dust.  For the real fog in Kuwait,  you've got to be out late and be in the right place at the right time.

It is unfortunate that it is almost impossible to capture on film (or maybe I just don't have the right high-tech equipment to do it).  Driving conditions in Kuwait are dangerous at any time, but when you suddenly drive through fog in the wee hours of the morning on the highway, you tend to pay closer attention to the road and what might be in front of you or coming up from behind than trying to locate your camera.
Posted by Desert Girl at 12:23 PM