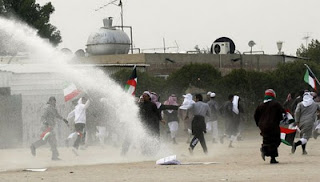 "There are at least 120,000 Bidun jinsiyya (without nationality) in today suffering from the lack of human rights. They cannot legally obtain birth, death, marriage or divorce certificates. The same applies to driving licenses, identification cards, and passports. They do not have access to public education, health care, housing or employment. And while they face some of the state’s harshest discrimination policies, they have no recourse to the law and its courts. Simply stated, the Bidun, who are equal to about 10% of the Kuwaiti population, do not exist.
...On the 12th of December, the stateless attempted to protest again to state their demands and to show support for those who were going on trials for protesting. Around 31 men were in court for ‘illegal protesting’ and were released as the judge decided to adjourn the case to the 23rd of January. Kuwaiti and stateless activists showed up to the court hearing to show support as the interior ministry refused to give permissions for any sit-ins. Kuwait Human Rights Association issued a statement condemning the trials and stating that the Kuwait constitution grants the rights to peaceful protesting and thus none should be prosecuted. Parliament members did not have a say in this and the only political bloc to have issued a statement in solidarity was the leftist Taqadomi movement. According to their lawyer Mousaed Al-Shammari, the 31 men might get 3 to 5 years jail sentences.
...This Friday, as reported by activists, tweeps, and news agencies, riot police used violence against stateless protesters and more than 20 men were arrested, among them two journalists who were later released (Fahad Al-Mayah and Hamad Al-Sharhan). According to a report by AFP: “Kuwaiti riot police used tear gas and water cannons on Friday to scatter hundreds of stateless protesters demanding citizenship. The police sought to break up a crowd of 400 people gathered after noon prayers in Jahra, raising Kuwaiti flags and banners that read: We demand Kuwaiti citizenship.” Stateless activist Mousaed Al-Shammari was reportedly arrested as he was trying to convince protesters to leave. Some wrote that he is now on hunger strike protesting his detention. According to a report by Reuters, there were also minors beaten and arrested in Friday protest."
- - -


I'm just re-posting and will leave it to readers to draw their own conclusions.  Mona is a Kuwait-born Bidun posting from London.

Is our Wise government solution to this issue is waiting untill the bidun get fed up and leave"if they're able to leave"? or decline in number for their inability to get married ?

If its much of a damage to kuwaits economy .. don't give them Equal rights as kuwaiti , how about equal rights to Expats ,Egyptians are living in much better conditions than Bidun .

Kuwait government should provide proper education for bidun and maybe hire them instead of Expats that fill our schools and hospitals .

We seriously need a fast solution to this tragedy we have, its In-human and some people have their priorities mixed up calling for freedom, dignity and pride busting up the national assembly makes u a hero but a bedoon person that just wants to live a simple life with dignity isnt alllowed its sad really