Getting Ready to Go to the AUSA Convention in DC 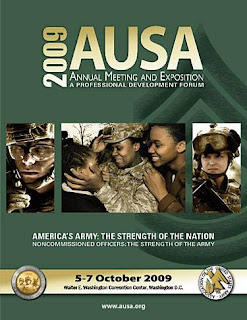 My how time flies when you are sitting on your fat ass doing nothing.... I can't believe how fast this year is going! Eeek. My mother used to tell me that the older you get, the faster time passes, but what tha Fuuuuu!
I'm getting ready to go to the Association of the US Army's annual convention in Washington, DC. I've been bugging my company to send me (again) for 2 years. I was really really looking forward to it, but then somebody threw a monkey wrench into my gears. I minor glitch. I try not to harp about work-related issues online because one never knows. It is just not prudent. Anyhoo, when Sally did my hair she also read my coffee cup. I hadn't told her that I am going on the trip, but she said, "Oh, I see you are travelling. It will be (pause) annoying." Yeah! That just about summs it up. Annoying.
Anyhoo, the convention is cool (although I always get nervous prior to business-related travel). It is enormous: 500 booths and takes up the entire area of the Washington DC convention center. It lasts for 3 days every year at the beginning of October and is the largest gathering of defense contractors and military personnel in the world. Because of my job in the Wonderful World of Defense Contracting, I should really be there every year. Ultimately, we should exhibit there, but I don't think I'll ever get them past the "Oh my GOD that's expensive" scenario.
My personal opinion is that if you are doing any kind of business development work with the US military, your company should be there - either as a participant or as an exhibitor. At the very least, your company should become a local member of AUSA's Kuwait Chapter (which is listed to the right of the screen here).
What does AUSA do? It is an organization that supports the troops and their families - basically in any way they can. It isn't political - it is about the human side of the scenario. (That is a very loose statement because any military organization is a military organization.) But locally, AUSA runs activities like barbecues for the troops and provides a locker of civilian clothing so that soldiers returning home on emergency leave (like when someone at home dies), they don't have to travel in their uniforms. Nationally, the organization lobbies for better benefits for troops and their families. If at all interested, you can check them out online.
I printed out the list of activities schedule and it is 24 pages long. The list of exhibitors is something like 15 pages long.
Anyhoo, it is in DC and I get to see my family. When I went in 2006, I got to hang out with Bobarino and he's all about the military, so we had fun. I learned a lot from him and I appreciated his input.
Several years ago, the Washington Post, ran an article about the convention and provided a map to the booths that had the best marketing give-aways. The Consul to the US Embassy along with one of the local AUSA guys went to the convention and did the treasure hunt. I wish I could get my hands on another map. The give-aways that I got were pretty standard except for some military type video games where you shoot the crap out of people in different terrain (ok, not so different from most of the video games available commercially, but still). I also got goggle wipes, a tube of goo that will keep your gun from jamming in the sand, a little toy eagle, a whole lotta pens, some key rings, and a few tote bags. Yeah, basically junk, but free junk.
I also shipped back 30 pounds of information on everything everybody had to offer. My boss told me "bring back brochures", so I did (via DHL). I'm not carrying all that crap on a plane! My shoe purchases take up too much weight quota for that. As if.
I still haven't heard from Diana or The Romanian and guess what - I'm not waiting next to the phone. This year has been very revealing to me. It is strange. Just when you think you have everything kinda figured out - BaBAYAM! I have lost a few people who I thought were my very dearest friends and I have found others who I wouldn't have imagined I would become close to. Life is fascinating, isn't it?
Posted by Desert Girl at 7:42 AM

Do you still work for the same local company? From reading your blog in the past it sounded like your job had nothing to do with the military.

"Same" meaning how long? Well, since I started this blog anyways. I'm tricky like that on on anonymous blog.

Well I was refering to the job you were talking about from this earlier post "Our company hasn't paid our salaries for February yet. They have been consistently late for the past 4 months (once, the delay was 30 days). Our employees are selling their gold (and their wives' gold) to make rent." I was thinking you were a technical writer for a local company, thats all, maybe im wrong. :)) Cheers

They continued to be late for a while, but like a lot of Kuwaiti companies, they get away with it. Supposedly, the Ministry of Labor monitors bank deposits, but not always apparently.

We are indeed a contractor with the military, but I'm billable on a military contract as I'm a corporate person, so there are no audits of what the company overall is doing (or haven't been thus far).

Employees could complain to the Ministry of Labor, but run the risk of being fired for whatever reason they pick; as it is not an anonymous system.

I think that the military is too busy cleaning up the real bad culprits than to come after companies like ours that pay the direct-billable contract people first (or appear to) and then are late with the rest. Maybe their system will catch up sometime, but they'd need a heck of a lot more auditors than they have now; and those auditors would have to be educated on the nuances of Kuwaiti payroll practices. I would love to see it happen, but labor problems occur so frequently that it would be difficult to run after everybody.

I'm happy to know that you were paying attention to previous posts. That just makes me feel all warm and fuzzy....

Hey - which leads me to another Kuwaiti labor practice: I can still sexually harass people here and get away with it! Woo hoooo! :)