The BEST Ramadan Tent in Kuwait - The Palms Hotel 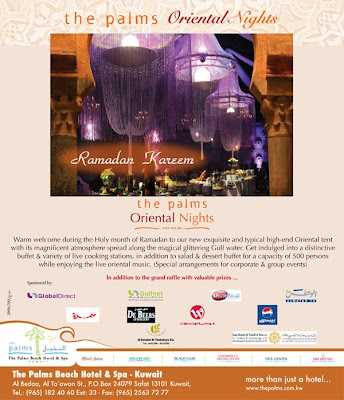 Holy snap! I have found it. After years of searching and looking.... It was right there, almost across the street from my house all this time.

The Man invited me to ftour last night and was so sweet. He didn't know where I might like to go, so he made reservations at 4 places (which, ladies, is what happens if you throw a tantrum like a 3 year old because your man has been lazy in the romance department. Ask me. It works.) We hadn't been to the Palms for a while, so we went there.

I have to admit - I almost ran back to the car when we first got there. The Mishref Sewage Incident has left a bad smell all over Kuwait; and last night, the epicenter seemed to be around the pool at The Palms. I covered my mouth and we forged ahead. And I'm so glad we did. The smell stopped at the door. (If you are planning to go anytime soon, bring a perfume-soaked hankerchief - you gonna need it.)

The tent is pretty - in maroon colors with really pretty Moroccan lamps. There are visible fire extinguishers all over the room (kudos Palms!). The only thing that really disturbed me about the tent was that the floor was unstable. I wore cute high heels and one of my heels actually went though the carpeting into an open joint. They need to work on that.

The food: FRICK-IN- AMAZING! Where do I start? Well, I'll start where I started. My mother has written restaurant reviews of popular buffet restaurants and the advice she always received from the Big Eaters is: Never get distracted by the inexpensive side dishes or bread baskets (as restaurants know they will fill you before you move on). Go right for the big-ticket items. So, I made a dash to the seafood station where Dude was grilling lobster and shrimp. I'm not talkin your average pinky-fingernail sized shrimp: these were good sized - probably of the large variety; and so were the lobster tails. Oh.... my.... God!

The Man was being so nice and continued with that, so I would fill plate and he ran them back to the table (low heels!). Then, we went to the Moroccan station. Yummers! They had huge chunks of tagine lamb, couscous with lots of veggies, bastilla, and shrimp in red sauce.

ALL the servers at the buffet wore hygienic masks! You go, Palms!! All of the servers were attentive, happy and very nice. Sometimes they get a little surly just by the sheer mass of people they are dishing to, but not these folks.

The buffet is very large - comfortable enough to accommodate all the people rushing it at ftour time; it runs around the full circle of the room with a salad station in the middle. It is comfortable, unlike some places with uncreative single-file lines (that everybody in Kuwait knows people are bound to jump). The Palms buffet had separate stations so jumping was ok.

Food stations included pasta, pizza, seafood, Indian, African, Moroccan, desert, salads. There was also a big lamb/rice area (ouzi). There was an Egyptian area, but I think that is just for shoor.

The Palms also has THE BEST CHEESECAKE IN KUWAIT. Real cheesecake - like you would make at home with Philadelphia cream cheese. The kind that my sister used to make. I am so going to order one!

For the 2 of us, we paid 19KD and some change. I don't bother going to a lot of the buffets anymore because they are such a rip-off; charging exhorbitant prices for inexpensive or poor-quality food. The Palms is definately not that: exceptional food and service at a good price.

Thank you, The Palms, for giving me something positive to write about (instead of bitching, moaning, and complaining as usual!)

The place looks amazing, got to go there this week.
But the most fantastic thing is a man who is good enough to be called "THE" man.
Mr. Man, you're the luckiest man on earth :-)