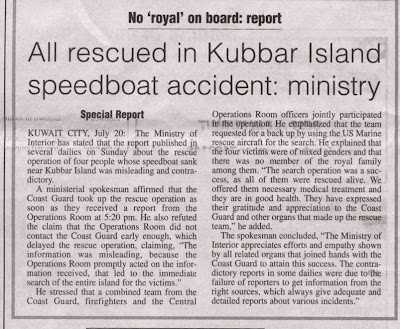 (Related "organs"? WTF??! Organizations!)
Youse guys mighta heard about this accident. It happened on Friday off of Kubbar Island. I just found out last night that my friends’ boat was one of the two involved in the crash.
I don’t know many details myself, but I know that my friend and his girlfriend (why can't I ever remember her name? She's so nice!) were in the water from 5:00 pm until 2:00 am; which doesn’t surprise me. Someone called emergency services when they crashed and then they waited to be rescued.
I don’t know if he’s ever seen the movie, “Open Water” or not, but I think I’ll buy him the DVD (OMG, DG! You’re such a bitch.) Seriously, he was very shaken up by it. I would have been too. There are strong currents around the islands and they were really lucky to have been saved. I've seen sharks close to Qaruh and they aren't small. The one I saw was about 6' long. I don't know what kind it was. They put it right next to the 5' baracuda they caught.

It’s kindof ironic that other members of his family were stranded at sea years ago when they had engine failure. I think the guys were rescued after 15 days in a small fishing boat. Picture.

I’ve been in 2 separate incidents where we had boat engine failure (different boats) and the coast guard took 3-4 hours each time to reach us.

It also wouldn’t surprise me that a US military helicopter assisted in the rescue.
It also doesn't surprise me that people are playin The Blame Game over responsibililties. Train, drill, train, drill (repeat).
Although I jest, I am so glad you are okay, Mishal. Your friends love you so much and everyone who has ever met you likes you immediately. We are glad that you made it safely to shore. Alhamdulillah salama, my friend.
Posted by Desert Girl at 9:53 AM

soon if the parliament gets their wish, no more Kubbar.

Yeah, that's one battle that I want to see.

Who goes to Kubbar?
Whose bigass yachts are moored off Kubbar?
Who DAT on the beach on Kubbar?
Who does she think she IS with that bathing suit on Kubbar....

What an ordeal! Poor people

that week we where at kubbar...we heard about the incident the next day and where shocked...

the following week we went and found that there where coastal guards (khafar il sawa7il) which was something new!