The glamorous camping (glamping) that we do in Kuwait is not the camping of my childhood in the States.  As kids, got pup tents and canned kidney beans, while the adults got to sleep in the warm trailer.  We spent long, scary nights at national parks or camp-sites for pay where there was often no running water.  The worst places had outhouses.  I stopped ever being able to use them after one cross-America camping trip with the family.  As tweenagers, we always shined our flashlights down the outhouse hole to make sure no monsters were going to grab us and pull us in.  In Nebraska, the monsters came in the form of a pit filled with writhing black snakes.

My foray into Kuwaiti camping came the first winter I was in Kuwait.  I can’t call it glamorous.  Just a few tents, nothing special, up in Salmi.  We were there because my friends promised to take me gerbil hunting.  Gerbil hunting is the funniest thing you can do this side of legal; especially if  you go with “hunters” wearing national attire and you might have had something to drink before you left on the adventure.  We never did catch a gerbil.  I was laughing so hard that I wouldn’t have noticed anyways.  It was pure slapstick humour.  Here’s how it’s done:   Get a bunch of friends, gloves,  and a 4 wheel drive.  Similar to a Chinese fire drill, when the jeep comes to a halt after seizing a gerbil’s fixed gaze into the headlights, all vehicle occupants rush out and try to catch the gerbil by hand.  Weapon use is prohibited.   Nonplussed, we returned to sit in the cold tent when, ironically, a gerbil ran in, made a circuit around us, and ran back out. The perfect ending to a great night.

As I later made friends with other single Western female friends, the camp invitations started pouring in.  These were not overnight or extended visits; it was more like going to a nightclub with your girlfriends (without the bouncers or long lines).  We wore high heels and mini-skirts and lots of perfume like all the other girls there.  At that time, squat toilets in some camps made for some thrilling moments.  Balancing yourself, inebriated, in high heels over a squat toilet and perfecting your aim when a cold wind swirls around your nether-region isn’t for everybody;  only the strong-willed survive.

Camping has evolved even during the almost-20 years I’ve been in Kuwait.  For example, I have visited very few camps lately that still have squat toilets.  They have been replaced by the sit-down type (that you can later find after camping season ends April 1st littering the desert).

Sure camping started out as a Bedouin nomadic custom out of necessity.  Tents were mobile homes moved to better grazing grounds.  When people settled into houses, they would still go out to the deserts to camp – especially when the kids were out of school, usually in the Spring when the weather wasn’t too hot yet nor too cold.

Everything has changed.  It isn’t as family-oriented now, but rather a form of escapism in a society where alcohol and public dancing are illegal.  From November 1 to April 1, the deserts in Kuwait are transformed into cities of tents and lights.  The norm is nightclub-quality sound systems and disco lighting, outdoing the neighbours with barrier lighting systems (latest trends include multi-colored LED displays), and of course, lots of loud ATV’s (known here as “bungees”) that young children without helmets can drive up and down all night (and later give business to local hospitals and clinics).  Now, dune buggies with full-sized car engines (the likes of Corvette V8s) can be seen ripping across the sands with music blasting.

I’ve been to camps with paved/tiled walkways with outdoor lighting leading to individual sleeping tents containing flat screen TVs, HVAC units, waterbeds, and bathrooms with marble fixtures as well as sanitary ware (including Jacuzzis) that would rival what you would find in some of the finer home magazines.  I’ve seen everything you can imagine being trucked in:  A New Years Eve party tent that would put Ringling Brothers big top to shame; housing 5 bars and several dance floors.  A tent modelled after a trendy bar in Los Angeles with flowing white curtains, white lights,  black marble flooring and a black marble fireplace.  Tents with old, large brick fireplaces.  Decorating feats for temporary living.  At the end of it all, what can be re-used is packed into Conex containers and stored for the summer. 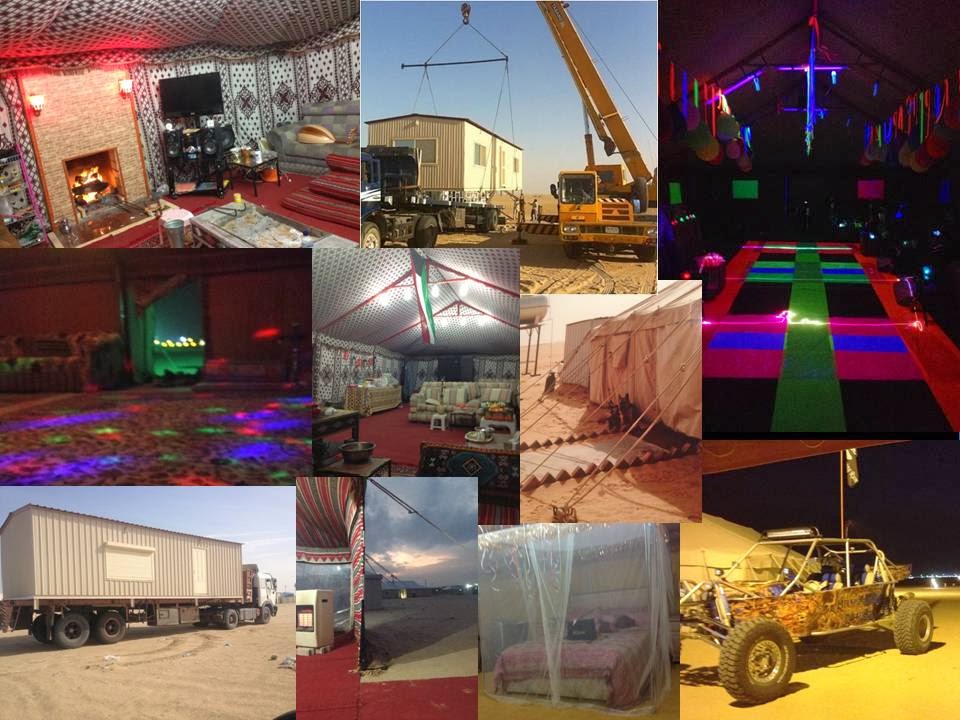 A Kuwaiti camp video went viral on the internet in Kuwait several years ago.  Someone dug out an enormous multi-levelled pit  in the desert.   From the outside, it appeared to be just another incongruous beige desert tent.  From the inside, it was a nightclub with a stage and a roped VIP section.

Businesses have sprouted to cater to campers.  Tent companies and outfitters have made fortunes off the season.  I’ve heard of tents selling for as much as $150,000.  And the peripherals:  furnishings, electric systems, sound systems, generators, plumbing, wiring, ceramic and marble work, kitchen equipment, heaters, air conditioners, satellite and internet service, lighting, fencing, pest control (think scorpions and snakes), caterers, DJ’s, and grounds-keepers/guards.    Even restaurants (including Pizza Hut) and some salons will deliver their  services your camp if you give them the GPS coordinates.

For those who want to do it on the cheap, there is a camping scrap yard in Mina Abdullah where various camping stuff has been either salvaged or sold. It is a weird and funky place close to Camp Arifjan where you can find everything from tent posts to used water tanks to the fabric woven from camel hair used in “bait shaar” (hair house) tents.  The entire place looks like something out of a Mad Max movie.

I became addicted to live-in camping last year when I shared a tent with a friend in a quiet area near Wafra and spent every free hour there.  This year, I have my own tent for the first time in probably the busiest/noisiest camping area in Kuwait:  Julai’ia.  We are a group of approximately 10 friends with a compound of tents.  My tent is a 6x6 metre tent; others are either the same size or larger.  All of the sleeping tents have comfortable beds (mine is a queen sized pillow-top) and bathrooms with porcelain sanitary ware and tiled floors.  Most of the sleeping tents have flat-screen televisions.  We have a very large tent for parties and we occasionally bring in live bands.  There are a few tents for when it is warmer and the sides can be removed. When it is cold, everybody has a heater (or two or three) for their tent.   We have 2 mini-ponies,  a goat, a bunch of chickens, and several visiting dogs.  We also have several “diwaniya” style tents where friends come and go; with or without invitation, all are welcome.

Expat friends ask how you could set up your own camp.  These days, the facilities have become so abundant that it is easy.  If you just want to go with the family over a weekend, you can either rent an entire camp or a tent on a commercial compound.  Unfortunately, most of the companies just advertise in Arabic.  There are many rental camps in Julai’ia (off 40 between 240 and 245 roads at the turn where the temporary police station is set up during camping season) and if you stop to ask, most people (including the police on duty) will be willing to help you find one.   A good rule is that the camps with the enormous bouncy castles are rental camps.   If you want to buy your own tent, the tent market is behind the Friday Market in Rai.  They always have tents on display during any season.
Posted by Desert Girl at 12:44 PM