The Adventures of Bitch Queen

When is the dust going to stop? OMG! This is the most disgusting summer that I can remember. Every weekend it is dusty. I know that they predicted a bad summer, but this is terrible. I’m in a constant bad mood – it is almost like really bad PMS, only without being able to breathe and with a bad headache. I sneeze, I cough, I have many a bad-hair-day. In a word: sucky.

I was in Kabd Thursday night (don’t ask, don’t tell) with the girls. Not only was it dusty, but I was stupid and drank something “of questionable origin”. Rather than being my norm 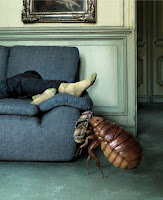 al happy-go-lucky refreshment-drinking person, I was The Bitch (as in the American tense of the word) Queen. I never throw hissy fits and I am never rude to hosts – especially when they have been overwhelmingly kind and courteous. I owe them a major apology. It was bad. I saw a stalker-cockroach of gargantuan proportions, had a shrieking fit (again, SO unlike me – I’m not the girlie-shrieky type) and got in my car to leave. WTF???? How did THAT happen?

The Romanian was totally angry at me and didn’t even talk to me all Friday. I don’t blame her. I was bad. Me sorry. Wallah, Wallah, me sorry!

Add to that getting busted by Bu Merdas. According to his BS, he doesn’t mind that I go to parties (“I trust you, baby.”), but he does mind when I don’t pick up the phone. (He is so totally into reverse psychology and he thinks it will work with me. Tee hee. Isn’t that cute? He’ll learn.) Well, being The Bitch Queen that night, I was in no mood. He does mind that I go to parties. It pisses him off to the core and I can feel the waves right below the surface. Well sheeeeet, if he wanted to come with me, he could. If he wanted to take me somewhere that would be fine with me too. As Slaps says, fill my need for socialization.

None of that matters because he was busy all Thursday night going to the diwaniya. You do your thang, I’ll do mine.

Socializing: Okay, truth-be-told, I don’t even like going to parties, but I do love hanging around with my girlfriends and having a good laugh at the end of the week. I am generally only good for about 2 hours before I whine that I want to go home (always take my own car). I am no good in the dark with loud music; I find it unpleasant to the senses. I have been to many parties in Kuwait over the past 12 years; and I can count on 1 hand (and not even a complete hand) the number of times I have actually taken a phone number. Out of that statistic, I seriously can’t remember even one that I had a romantic interest in. Mostly, it was just because I thought that someone would be a nice friend and that’s it. I don’t go to parties to “hook up”: C’est not my style. [My Party Creed is (and I have said it to many a host at many a party): ‘We are here to drink all your alcohol and eat your food, then we are going home. If you have a problem with that, we’ll leave now. If not, we are here to have fun.’] I go to parties to make fun of my deranged friends. You know – stuff you can use against them later; preferably at some stuffy family event or when they are running for political office (I’m still waiting, Cynthia…… the day will come….. I have pictures...).

Thursday night wasn’t even a party – it was a gaada with the guys playing the oud and the organ, good food and generally having a nice time (ok, until the 4” cockroach appeared and I lost my frickin mind).

What I really don’t like is when my girlfriends start laying on the guilt when I want to go home to my pillow. “Noooooooo! Come on, (Desert Girl), you HAVE to stay….” Uh no, actually I have to go home. Sheikha Minor has left bruises on my arms where she literally tries to pull me back in (damn, she’s got boney fingers!). Leave me be, woman! Then comes the guilt: “Oh, you’re leaving because some man told you to go home? Is that it?” Puhleeze. I wanna go hooooooooooome.

The Analysis. Slapperella says it is cultural: that it isn’t even that men here don’t want you to go to a party and have a good time; they just can’t take it when another man looks at you. Men look at me all the time and it is highly unlikely that at the parties here they can even SEE me; It is always too dark. (It isn’t like I’m wearing anything revealing at a party either. The most effort that I put into it is changing my shoes; I have spectacular shoes. I don’t do the whole tight, trollop clothes. Nothing on me is hanging out. It is all very normal: shirt and jeans. I’m of the opinion that “what you see is what you get” is enough.) Men see me at the mall, at restaurants, driving down the street. Big phuckin deal. Unless Clooney is the one looking, I usually don’t care for any reason much more than an ego boost. (Oh, okay, except for the Guy With The Wolf Eyes at the Crowne Plaza this weekend. Holy shit – it was love at first sight – and I let him go! I should have thrown him my mobile… ok, totally different story….)

Back to the content of my story: I had this problem in the start of my relationshit with The Man. We had battles – not fights. It was vicious. However, it was different with him because we were always going places either with my friends or his, so I had no need to socialize in any other way (if I’m close, I’m never far, right? Works for me.). I’m a social creature. I like the interaction.

I guess I am going to have to compromise – as is Bu Merdas. I’m not staying home waiting for any guy, but I guess I can probably give in to something that he obviously hates me doing – even through all of his BS reverse-psychology.

I don’t want to upset someone who is close to me. At the same time, however, my girlfriends are close to me too. It is a difficult call.
Posted by Desert Girl at 9:48 AM

Which organ were they playing?