My friends are cougars 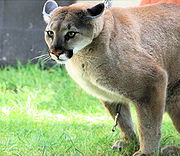 The term hasn’t really hit Kuwait. Maybe because there aren’t a lot of cougars out there or maybe people just haven’t heard it yet. I have turned The Romanian and Slapperella (now referred to as “Cougarella”) onto it. They giggle. Ok, neither of them is near cougar-able age, but they still like younger men. Personally, I like the packaging, but the minute most young guys open their mouth, the magic is gone. Oh, if they could only learn to shut up....

From Urban Dictionary.com (I like this one)
Hot and sexy older woman, usually in her 40s or 50s, single or married, who is sick of her same-age counterparts which are usually hairless, have big guts, who only talk about their insurance premiums and have the TV remote control attached to their hands. Cougars are attractive, in their sexual prime, who know what they want and aren't afraid to go after it. BIG misconception is that they dress cheap, wear hot pink nail polish, animal skin prints and are not-so-attractive old-looking hags with bleached hair (Yeah those women exist, but they are NOT cougars). True cougars are classy, beautiful creatures who have made their successes on their own, have real brains, usually with expensive cars/homes, and are real head turners. Cougars seek younger men, and don't have to sneak up and attack...they know their younger mates are eager to get an experienced woman who won't ask if they'll call them the next day. Being a cougar is a positive thing.

From SlangSite.com
Used for a middle aged woman who hits on twenty-something men.

Cougar Alley Definition (From Urban Dictionary)
A short stretch of bars and restaurants on Rush street (between Oak and Maple) found in Chicago, IL. Found circulating in and around these establishment are numerous cougars. They congregate here in search of nightly prey.

Am sure cougars PURR but they don't meow... so that makes you what?

Well, Did you see Barney Stinson from How I Met Your Mother tame the cougar to get better grades for Marshal?
Well, that sure is Legen-wait for it- dary!