I am going to drink myself silly when I get back to Virginia. I am going to giggle with my sister until my sides hurt and I can’t breathe and I have to pee. I’m going to play with the big dogs and run around making them crrrrrrrrrazy (in turn, making my sister crrrrrrrrrazy). I’m going to take my mother places that she can’t get to without a car (she doesn’t drive). I am going to give my nephew THE best gift in the whole world (can’t say what it is till later as someone from home might be reading this and then tell my bigmouthsister and then of course she’ll tell him).

“When wine goes in, secrets come out.” Apparently, she didn’t know that it was WRONG to mention at her annual Christmas party, that her best friend’s husband (who we really think is gay) runs naked on the treadmill. As my sister said, “Well, I didn’t know it was a secret or anything.” I won’t be able to burn the mental picture of him and his “dangly bits” flopping along on the treadmill. Ick. I wonder if she stands behind him with a leather riding crop… ok; Don’t go there.

You know what I really want for Christmas this year (besides world peace)? Clothes long enough to cover my fat ass. Don’t get me wrong – there will ALWAYS be a thong at the base of it all; I just feel like this is something I need to do at this juncture. Has my world come to this?

Bring on the eggnog, baybee. I’m in it. I’ll just put on something long to hide my BFA.

I had a friend who used to make kick-ass egg nog. What the hell was her name? She was always the bubbliest person at the party. The stuff had about a gallon of bourbon and real nutmeg. Hey, did you know that nutmeg has been banned in Kuwait on/off for years as people seem to believe it is an aphrodisiac? Well go figure. Maybe they should ban sushi and crabs too because people have been known to turn into horndogs… I digress…

The newly re-decorated Sakura opens this weekend. Woooo Hooooooooo. I’ll be there, getting’ my sush on.

Oh, want to hear something really stupid (I know – you are SO used to that from reading this blog, aren’t you? SHUT UP!): Our work hours are until 4:30 here. On Wednesdays, the Chairman leaves early (he’s got a huge farm in Saudi on the other side of the border somewhere and I assumed that’s why). By 3:45, the ENTIRE company has left and they have locked the doors. This happens every Wednesday and I look down from my pulpit above the masses (office with a window to see the central area below) and think, ‘Damn – what a bunch of slackers! Just because the BigGuy is gone, doesn’t mean that everybody should leave early consistently every Wednesday! Where are their work ethics?’ So, this went on and on. Finally, about 2 weeks ago, my secretary sees me at my desk working at 4 when she is leaving on a Wednesday. She says, “(Desert Girl), you do know that we leave at 3:30 on Wednesdays, right?” Shiiiiiiiiiiiiiiiiiiiiiiiiiiiiiiiiiiiiiiiiiiitt. I remember that I saw something about that when they gave me my joining documentation 3 + months ago.

This will be my first Cwimmas without my daddy. It was the last time I saw him – with snow on the ground. He was in front of his home, standing in the yard and waving “bye” as I left to go to the airport. I remember driving back from Nemocolin resort (where we usually go with the 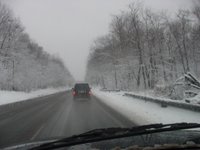 entire family on December 26th) through the mountains. We usually go in several cars. I was driving my brother-in-law's car, and I looked over at my dad in the passenger seat as he slept. That song came on the radio, “The Living Years”. I mentally asked myself if I had said all the things that I wanted to say to my dad; that if he left me soon, did he know everything? Did he know how much I love him? I said, ‘Yes’, and I just looked at him and smiled. I think I’ll have extra bourbon (his favorite) in my eggnog and say a special toast to dad and leave chrysanthemums on his grave. Nobody ever knew what to get my dad for Christmas. Men are so difficult to buy for. If you think that someone can’t ever have enough sweaters – you are wrong!
Posted by Desert Girl at 12:20 PM

The newly re-decorated Sakura opens this weekend. Woooo Hooooooooo. I’ll be there, getting’ my sush on.

As for your big butt, why cover it, I enjoy big butts, I say show it to the world.

Desert Girl,
I really enjoy your posts. They are a bit of a mixture between Sex and the City and Bridget Jones. I am moving to Kuwait with my brood in June, and you give me hope that there are other crazy Americans there with whom I can laugh and commiserate. Thanks.

I hope you have a blast back in virginia. im actually in bahrain at moment and im going to miss christmas with my family this year, which is sad :( So have fun for the both of us back in the States(and a drink of two for me :D hehehe)

Purg - you have been in Puertokuwaitrico too long! :)

Carly - when you get here, look me up! If you need any help, just let me know.

Aceituna - Pitchers and pitchers - just for you! :)

Have a great holiday...and a wonderful reunion.