Thanksgiving in Kuwait - New US Ambassador to Kuwait

I have a lot of friends who host their own Thanksgiving dinners/lunches (and thank you all for the ZERO invitations I received this year, by the way - you KNOW who you are).  Most people somehow wrangle a big turkey from the PX at Arifjan (because for the past 3-4 years, most grocery stores haven't stocked the big ones.  If you know of anyplace that has them now, please send me a message (amerab@gmail.com) or comment, so I can post info here.  I never thought I would be a conspiracy person (and would scoff at my dad, God rest his soul) but I have conspiracy theories on just about everything these days, including why there are not big turkeys in Kuwait.

So anyhoo, I went to the US Embassy for the American Business Council's annual Thanksgiving event.

I will first talk about our very humble and down-to-Earth new Ambassador and his wife (Ambassador Douglas Silliman and his wife, Catherine).  I heard one speech several weeks ago given by Ambassador Silliman and he didn't sound stuffy or like he was reading off a card.  He made good eye contact with people and ad-libbed with humor.  I liked him. (I also liked the new staff who all seem to be equally humble and approachable and are no longer the same crowd of entitled 12-year-olds as in previous postings.)    While I was at the T-day event at the Embassy, he and Mrs. Silliman walked in.  Since they are somewhat new to people in the community (arrived in August), a lot of people don't know who they are.  Mrs. Silliman walked alone through the crowd.  She introduced herself, "Hi... I'm Catherine."  I overheard people asking her, "Do you work at the embassy?"  She just responded with, "I live here...."

I love approachable people.  It makes life so much easier.  Especially when they are representing my country in Kuwait.  What a great first impression I got!  I talked briefly about dogs with Catherine (she too has an aging dog) and vet services in Kuwait.  She had also lived in Rhode Island (how many of us can there be?!)  ... before she had to move on to  the next guest.  Lovely woman and I hope to have the opportunity to talk more to her in the future.

This just gives me something else to be thankful for this Thanksgiving week!  Thank you for gracing us.

Ok so I'm writing about Thanksgiving, right?  The T-day event at the Embassy was catered by the Hilton.  Prior to this holiday, it was catered by The Crowne Plaza.  I have also had Thanksgiving meals either catered by or directly served at other hotels.  Unfortunately, it is all the same, sad story and I'm here to tell you why.  These kitchens NEED AMERICAN CHEF CONSULTANTS during this holiday.  You can not have a French (or French-style) chef preparing an American T-day meal. Why?  Because AMERICANS DO NOT LIKE STUFFING LOG (which just looks something obscene), or cranberry SOUP (not sauce, nothing gelled - but sauce like you would pour over ice cream).  No no no.  There are also no noodles involved in T-day.  Or Asian salad.

I've been in Kuwait for 18 years.  I can count on 3 fingers how many providers of Thanksgiving meals actually get it right.  I know, I should just be thankful and stop complaining, right?  If I didn't complain, where would my blog be, I axe you?

Hilton had canapes of what they called apple, pecan and pumpkin pie.  Squash and honey (which they labeled "sweet potatoes and honey").  The log.  The sauce.  Sigh....  They did, however, do a good job on the turkey.  The gravy - not so much.

I know that  America is a melting pot of different cultures, traditions, religions, and foods brought from all corners of the world.  But... there are kind of standards (staples if you will):

The Sultan Center usually offers a take-away dinner that includes many of the above.  The Radisson Hotel also just sent me a flier that appears to be acceptable. 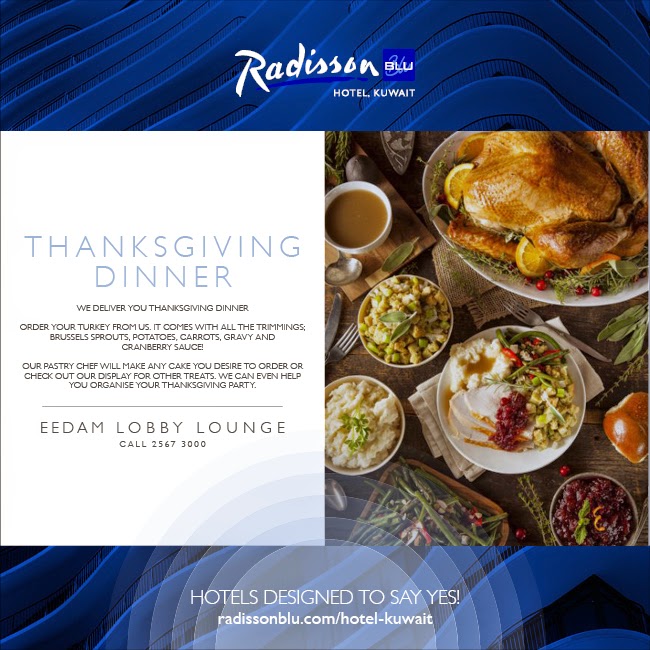 I'm going to the Association of the US Army event this week and I hope that there will be some of my favorites above.  I just don't understand why these chefs can't look up recipes on the internet instead of trying to create their own renditions.  I've tried to make their lives easier (above).