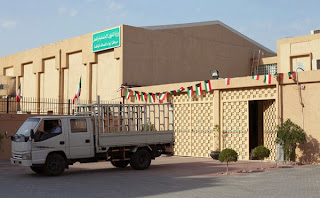 This is the new 500-bed domestic worker shelter.  (Diggin' the architecture and the use of windows and light... I feel comfortable and safe just looking at it....emmmm..... Just the kind of place I would want to run to in the middle of the night if someone was beating the crap out of me.  And easy to find with signage in my native language...)

Okey dokey - This is a step in the right direction.  But I'm just wondering if a domestic worker (maid, driver, etc.) can just show up there 24/7 and ask for help - or if they have to (for example) wait until the morning, go to their embassy, wait for someone to help them and fill out a report, and then go.  What do they have to do to get in?

Human Rights Watch (2010)
http://www.hrw.org/news/2010/10/06/kuwait-abused-domestic-workers-nowhere-turn
“While the Kuwaiti government currently maintains a 50-bed shelter for domestic workers, only embassies can refer workers there, and only after the police have cleared them of all charges, meaning that women typically wait long periods in their embassy shelters before reaching the government facility. When Human Rights Watch visited the facility, it was operating under capacity, despite the pressing need for shelter hundreds of domestic workers face, and overcrowding at embassy shelters.”


“In September 2007, Kuwait opened a temporary shelter to house runaway maids until their disputes with employers are resolved.”
Posted by Desert Girl at 10:07 AM