Sunshine on the Clock Tower Dome 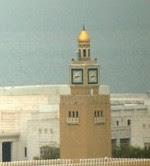 This is all a very random kind of post and I really couldn’t decide how I was going to title it. I decided on something related to the most positive part of my day (so far)….

This morning on my way to work, I noticed the clock tower at Seif Palace (built late 1800's/early 1900's). I have been driving by there for the past 11 years and I’ve never really paid particular attention/notice to it. Maybe this morning it was because of the way the light was hitting the gold dome – I don’t know. It was just very pretty; in a way that the Mormon temple in Maryland (I think at Bethesda) on the Beltway is at sunset with the light shining on it. The gold suddenly hits your eye and lights the path ahead. It makes you feel (for 2 nanoseconds before the next loser cuts you off) that everything is right in the world and you are exactly where you are supposed to be at that given moment.

Which is not where I was last night… I cooked tashreeb and broke part of my tooth. There was a little sliver of lamb bone and when I bit into it, there went part of my tooth, so I have to get it fixed. It hurts. There is an “emergency” tooth place near my building. Guess I should go there, but it reminds me that The Man took the Shedevil there in April after The Big March 23 Incident.

I don’t want to think of them (although I don’t mind thinking of him once in a while), but an unfortunate series of events lately has led me in that direction. I have met manipulative people in my life, but the Shedevil (formerly known as “Sheherazade” in previous posts) wins the grand prize. The Man thinks that I was mean to her, but he doesn’t know the whole story (how is it possible to “use” someone when they’ve asked for your help???) I’m sure that he knows deep down what transpired. I wonder now that if I had bought him a more expensive car than she did, that he would have stayed with me. BMW? Mercedes? Escalade? House in Colorado? Secure future? 7,000 kd cash…. What is the price? Name that lucky number.

The Romanian had a boyfriend for many years who she loved deeply (at one point until she figured him out). Nawaf always said that he wanted to marry a rich, submissive woman. Romanian isn’t either. He drove up in his new Jaguar this week to tell her how much he loves her, how badly he wants to have sex with her, and to tell her all about his new, rich stay-at-home wife. He married the perfect woman: wealthy, submissive, and willing to “take care of the home” while he is outside doing whateverthehell he wants (safe or unsafe sex?).

And on that note – doesn’t anyone have any idea that the rate of AIDS cases is increasing in Kuwait? There are something like 6,000 reported cases (last I heard). Does anyone have a figure on the latest statistics?

I don’t understand why women put up with it. Are these women (in this case, Kuwaiti) so desperate to get (and stay) married that they don’t care that their husbands cheat and “make” them stay at home while they are out on the prowl (potentially contracting Godknowswhat)? Is it so much better just to have a man around once in a while (late at night to sleep with); to cook for; to clean up after? (Why not just take a job as a maid/nanny and get paid for it; rather than paying someone else?) I could understand it more if these guys were marrying young girls who hold a rosy picture of what marriage is supposed to be – stand by your man and all that crap. In the cases I know of recently, the women are older and divorced.

It isn’t even that they are counting on the man for support. Au contraire – Dudes are benefiting rather than the other way around.

Maybe I’m not married because I have always felt it better to be my own person and to live my life without allowing someone to “control” me (not that I would stay very long with someone who tried). I don’t want anyone to abuse my trust or my intelligence. If I am in a relationship and suddenly realize that a marriage won’t last – I don’t want to be there. Bada bing.

Yesterday morning, a bird on my windowsill woke me up. I usually take the birds as signs or messages. I think I got one yesterday, but unfortunately, it has kind of bummed me out. “Perhaps something doesn’t happen TO you, but FOR you.”…

I’ve been going through kindof a melancholy phase. I don’t know why. Nothing has changed. My friends are still my friends. My health is still good (except for my f-ing tooth!). My job is still ok/routine. I have met new good/decent friends and a few bad people. Things are much the same, but what is it? Naz called me out of the blue last week to tell me that he feels (he’s psychic) that this is a very good period in my life when I am grounded; a good starting point for things to come. Why is it that I feel down? Very odd. Do you think that I need more chocolate in my diet? I do. Maybe I need to go shoe shopping again (although I just bought a kickass pair of purple shoes that ROCK).

This is all very deep, isn’t it? On to something totally different.

BTW – my very favorite pair of shoes is the Dolce & Gabbana pair that Slapperella bought first at Villa Moda. They were expensive, but damn I’m worth it.

I know I’m a total loser, but I just discovered Facebook (no, not because of the article in Bazaar because I “discovered” it 2 days before). I used to think of myself as relatively computer-savy, but alas there are things that I’m just not connected to yet. I have a whole new world now on Facebook. No wonder so many people get in trouble for playing on it all day (like my sisters’ employees, for example).

Ok another thing I’m retarded about – is there any way to get around the thing on iTunes that doesn’t allow users in Kuwait to download? Proxy bypass?

As a little side note: I went to the Ramadan tent at the new Movenpick Hotel at Bidaa for a subsidiary’s gabka. WOW. I love the place. The décor of the entire hotel is amazing and the food we had on the buffet was outstanding. The tent was on the beach, facing the water. The back of the tent opened up to the pools with torch-lit pathways (some with bridges over the pools) leading from the main building. I think if I was going to plan a wedding in Kuwait, that area would be ideal (as long as it’s not during the summer!). It is the closest to a romantic spot that I’ve seen in Kuwait.

The hotel I love the most in the GCC is the Royal Mirage in Dubai. It is built to resemble a Moroccan fort. Freakin amazin. I also love the Bustan in Oman, but it is slightly less romantic – although amazing in architecture and location (between the sea and the mountains).

One of my billionaire friends called me last week, wanting me to recruit a personal assistant for him. I immediately thought of one young woman I know who would be ideal. Unfortunately, she sometimes lets her self-confidence talk her out of things and can be a little unreliable; she re-scheduled the interview with him 2 times and on the third, he called me. “Your friend is an asshole.” Ex – e – queeeeeeeze mee??? 1) That is just frickin rude. 2) Billionnaires/millionaires/people who have a shitload of money are a pain in the ass. 3) Billionnaires/millionaires/people who have a shitload of money are almost always guaranteed to be cheapskates; 4) I don’t work for him (or the ones like him who ask me to do favors then blame me if something goes wrong). A similar incident happened in the past with another not-so-rich, but still politically-powerful friend who asked me for a favor and then called and shouted at me when it was taking longer than he had expected. In the latter case, I sent him an invoice for 200 kd for “consulting services rendered”, and haven’t heard from him since. In the former case, I am going to ask him for a big gift for being rude (I can’t really blow this person off, unfortunately).

If anyone out there wants a job as a PA to a billionaire asshole with 42 agencies/companies – and you can name your package/benefits – just let me know (amerab@gmail.com). The requirements are: Westernized, extremely professional appearance/demeanor, a “yes person”, pro-active, must be willing to do both office work and personal work (making appointments for his no-doubt asshole wife and kids, schoolwork, etc.); full office skills (light book keeping, filing/organization, scheduling, corresponding with subsidiary companies and customers/potential customers, possibility of proposal/invoice writing). Proficient in English; Arabic preferred. This guy will potentially take candidates from overseas and pay for their travel to Kuwait.

Having said all that random stuff above, I would like to wish you all - Muslim, Christian, Jew ... whatever - a very happy Eid. May the light always shine on your clock tower dome. :)
Posted by Desert Girl at 1:36 PM

so you appear at the end of Ramadan, intresting ;p

here i am again, Happy Eid to you, enjoy it as much as you can.

I've been waiting for your post and wondering what happened to you. i admire your thinking and writing.
Thank you.
Maja

Very nice to see that you are writing again - I am the one that you helped with the cake this summer! It was the best suggestion that anyone could have given! I find your post so entertaining and see my thoughts to be similar to yours at times. Anyway, maybe working for the rich billionaire would not be as bad as it sounds! Keep your head up and know that we all have our days where we are down. Take care!

Aah the Man and what havoc he stirs within that heart of yours.

Sorry about your tooth.

and about the building. wierd how some buildings are always there but we never notice them.