I met a Kuwaiti someone over the summer who was trying to buy a chimp.  He didn't make it to friend level.  Anyone who would do that isn't worth my spit if they were on fire.  Most of the babies are taken from the lifeless bodies of their dead mothers; as poachers shoot the mothers so they can snatch the babies.  Effing sick.  (Think about THAT one next time you drive by the maternity hospital...) 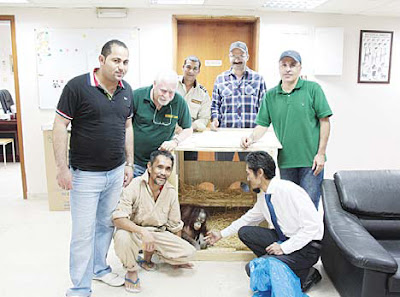 The Embassy of the Republic of Indonesia in Kuwait in cooperation with the Kuwait Zoo has successfully and safely returned home the orangutan, that was illegally smuggled to Kuwait in July 2015, to Indonesia by Kuwait Airways KU415 on Sept 13 and landed in Jakarta on Sept 14 at 15:50 local time. The repatriation of the orangutan is an implementation of the strong commitment both from Government of Indonesia and authorities in Kuwait to preserve the endangered species as listed by CITES which, unfortunately, includes the orangutan.  (DG note:  WHY is that unfortunate?  It is GREAT.  GREAT that they are listing these animals and confiscating them!)

The Government of Indonesia will hold into account anyone involved in this illegal activity and bring the perpetrator to the court. There were two female orangutans of 1,5 years and 6 months respectively sent to Kuwait without proper documentation in July 2015. The baby orangutan will be taken care of in Kuwait in order to give it the ability of feeding by herself before being flown home

And WTF was Kuwait Airways doing allowing an endangered animal to be brought to Kuwait?  Oh wait... I just said "Kuwait Airways," didn't I?    Duuh moment.

Whoever did the busting in Kuwait:  I LOVE YOU!!!  Some of us have been waiting for this type of law enforcement for DECADES.  Good for you guys!
Posted by Desert Girl at 3:30 PM