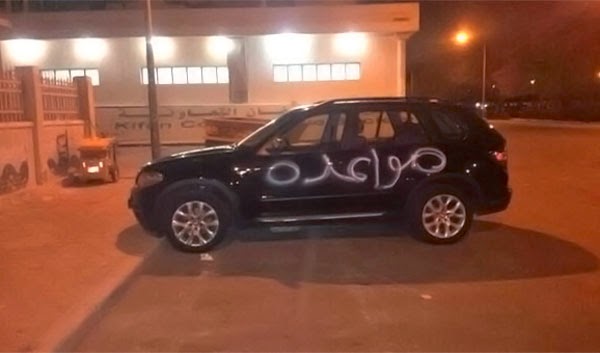 I've seen these photos on Instagram, but I didn't know what they were (because I'm illiterate and don't read Arabic).  Then yesterday,  I read about this on Kuwaitiful's Blog (LINK HERE) and this has really disturbed me.  No one has the right to go vigilante and judge the morality of anyone based on their sick sense of logic.

Typically, dating in Kuwait (especially between Kuwaitis) takes place discreetly:  Sometimes a man and a woman meet at a location and the woman parks her car and gets into the man's car and they go off together somewhere.  They might just be driving around (tamesha) talking or going to get a shawarma - who knows?
So some idiot/s have started vandalizing women's cars; targeting women as villains.

(Most likely it isn't the case, HOWEVER;)  Couldn't it be that her brother is picking her up to go somewhere together?  Couldn't it be her father or cousin or uncle or friend?  Are they having intercourse in the car?  Are they violating any laws?  And first and foremost


WHY BLAME THE WOMAN?

This is like saying that a woman who wears a mini-skirt is asking to be raped.  No one has the right to do something like this. Who are these people to judge anyone?

So do we now all have to install webcams and security systems around our cars?  If someone is breaking the law - bring it to the police's attention.  If it is a question of morals and what you think is right or wrong, make sure your own house is in order:   raise your own children well (these taggers weren't)  and try to do something positive to change your society legally; rather than this!

I hope that these are isolated incidents (maybe by scorned lovers, a jealous woman, or others who know the women, seeking revenge).  Regardless, I think this is dangerous and I hope that the police are taking it seriously.  You never know if these types of extremists (because that's what they are if they have actually pre-planned the acts) will do more to escalate.

I don't read Arabic either, but strangely, we have had things like that happen here in the USA. Recently, Actress/Comedian Joan Rivers said those 3 girls kidnapped, raped, and held hostage in OH should "get over it". What an A%%hole statement. And, those girls had several children while they were being held hostage. Here, in Louisville, there have been many victims of a car mess such as these cars--it is usually racism or someone who is jealous. It happens a lot of times when a black and white are dating or a white woman is dating some man from a foreign country, so I think the man deal here is jealous men. We are a very diverse city and with around 1 million population, we have a lot of different nationalities here. But, the cops here are right on top of this and they are charged and get prison time. As far as "anyone deserves to be raped" that is just plain ignorance. NO one deserves to be raped or sexually abused. That is a big problem here, especially with teachers. We have one teacher with 2 charges or rape on a student here and she has 38 charges in an adjoining country--she isn't teaching, but they keep delaying this trial due to "croneyism". She should be put in prison forever since one of the students she raped is mentally challenged--we have an upcoming election and I sure hope some of these JUDGES are changed. They do virtually nothing about this kind of thing--they don't want to hurt the reputation of the town by admitting a teacher has had sex with a student. Then, there is a man around the Lexington, KY area--same thing. They have the DNA, etc so WHY these cases get thrown out or even dismissed is a mystery to me. Another thing we have are the rapists that have to register on the Sex Offender List--for molesting a child, etc, they only have to register for 10 years. It TAKES a lot to get one registered for Life and check in every 90 days or the cops can check on him-I did get some of that law passed in Kentucky after a rapist had around 52 charges-his grandfather knew the Judge. Isn't that great. I had my State Representative amend Megan's Law so he would be a lifetime register and he ran out of this state, raped another woman in Texas, and only got 5 years-this makes no sense to me. GOOD job on this article and something that makes sense--how DO they know it isn't a relative picking them up? It is great how you help so many ppl.

i hate these hypocrates they follow women on the street and almost run them off the road ...BUT if they ever see anyone chasing or talking to a member of their family they want to kill them..HELLOOO you DUMB &^$^& the woman you are chasing is someones daughter, sister, cousin..GROW UP. Whats worse is when they folow women who are pregnant or have kid with them..WHAT now youwanna be the baby daddy.

Yes I wish the cops would address this….but my fear there is an undercurrent of officers who are abusing their authority (abducting women while in or out of uniform, pulling over women for "speeding" just for the opportunity to talk to them and see their driver's license), or else generally chatting it up on the phone or pulling over taxi drivers to obtain pocket change. While I am sure there are issues in other countries like the US, it's sad when women have to constantly be on guard in Kuwait

500 years ago, when I was going to american women's League we had some people from the embassy talk to us about doing taxes, passports, crimes here etc. so someone asked about what to do when men were chasing us in cars and he really had no answer because if you try to outrun him. (Ok these were in the olden days here when there actually was not bumper to bumper traffic 24 hours a day and you actually could outrun someone) because an accident might happen and don't go home, then he knows where you live and he even said you could maybe try to go to the police station. But there was a problem because some woman did that and filed a complaint and the cop was a cousin of the guy and told the tribe the woman's address and they harassed her relentlessly.
Gail

This problem is increasing. I mean to say dating this way...not spray writing. It should be controlled & spray guys should be punished.