Stop, children what's that sound?  Everybody look what's goin' down....


Disclaimer:  The below is a re-post of previously published information available to the public through any quick internet search or via Twitter.

KUWAIT CITY, Oct 9, (Agencies): Police in Kuwait have arrested seven leading stateless activists for “instigating” demonstrations and are hunting for eight more in a clampdown aimed at preventing protests, a rights official said on Tuesday.

Among those detained was the head of the Kuwaiti Bedouns (stateless) Committee, Ahmad Al-Tameemi and his assistant Ali Al-Enezi, the director of the Kuwait Society for Human Rights, Mohammad Al-Humaidi, told AFP.

Twenty-three stateless protesters including five teenagers were arrested on October 2 during a demonstration, said Humaidi.

“Today, the public attorney freed the five teenagers on $715 bail (550 euros) each pending trial. They are between 14 and 16 years old,” said Humaidi, adding that the youths were interrogated on charges of illegal assembly.

The remaining 18 adults, including a Kuwaiti activist, are still in detention facing similar charges, he said.

Police used tear-gas and smoke bombs to disperse the stateless demonstrators who were demanding citizenship and other basic rights, injuring at least three people.

Around 200 stateless men, arrested in previous demonstrations since Bedouns began staging protests in February 2011, are facing trial for illegal assembly, assaulting police and resisting arrest.
Some have been acquitted by the lower court while others still await verdicts.

Authorities in Kuwait insist that non-Kuwaitis living in the country have no right to protest, unlike the 1.2 million citizens.

Bedouns, who number more than 105,000, claim they have the right to Kuwaiti citizenship, but the government says only 34,000 qualify for consideration, arguing that the rest hold citizenship of other countries.

Kuwait has launched a campaign against Bedouns to force them to prove their original identity, depriving them of many basic rights despite criticism by international human rights groups.

Kuwait has long alleged that Bedouns, and in some cases their ancestors, destroyed their original passports to claim the right to citizenship in order to gain access to the state-provided services and benefits.

In an attempt to force the Bedouns to produce their original nationality papers, Kuwait has refused to issue essential documents to most of them, including birth, marriage and death certificates.

Meanwhile, unconfirmed reports said that in response to a call by John Moore (Twitter @JohnFMoore), a member of American congress, several Bedouns organized a rally on Al-Najashi Street since securitymen banned them from gathering in Taima Yard.

Reportedly, John Moore had encouraged the Bedouns through Twitter two days back to demonstrate and demand Kuwaiti government to grant them their rights as Kuwaiti citizens.

If you are on Twitter, there is a HELL of a lot of activity on the Bedoun cause and what is happening NOW in Taima, Jahra (Northern Kuwait) to the Bedoun.  This is your neighborhood.  Get educated on local current events.  You won't always read about it in the newspaper.

This is a post of an AI bulletin re-tweeted by Mr. Moore. 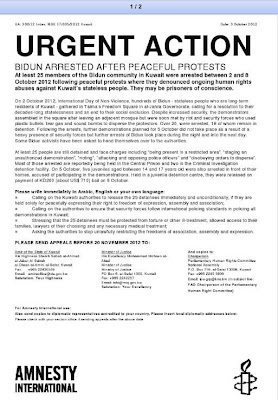 "Bidoons have been pressing for their recognition as citizens. The term “Bidoon” is used to refer to foreigners who migrated to Kuwait mainly during the oil boom of the 1960s and 1970s, without passports or whose passports had expired. It also refers to those who concealed their nationality in order to remain in Kuwait.However, Kuwaiti authorities say that 71,000 of the 105,000 people who are considered stateless in fact hold the nationality of countries such as Iran, Iraq, Saudi Arabia and Syria.
Earlier this year, the interior minister said that the 34,000 stateless people who qualified for citizenship fell under one of the four groups that included people in the police or army, people who were recorded in the 1965 population census, relatives of Kuwaiti nationals and children of Kuwaiti women divorced from foreign husbands.In April, the authorities said that Bidoons staying illegally in Kuwait could be granted five-year residence permits under a new scheme.
The new status will allow those above 21 years of age to sponsor themselves for the next five years.
Those who are below 21 will be granted a five-year residence visa as family members.Beneficiaries of the scheme will not pay fees for the duration of their permits and will be handed special cards that will guarantee them free health and education services.However, those who wish to benefit from the new scheme must regularise their status by producing the passport of their country of origin."
Per today's Gulf News - UAE.
One question, why is it that only Bedouns in Kuwait are demanding citizenship, how do other GCC countries handle their Bedoun issue? Many foreign countries are coping with illegal nationals, and if people do not follow the laws of that country and legalize their status, they are deported. Seems to me the Kuwaitis have been gratious.

Yes, yes, they have it all figured out! Hundreds of thousands of people fled their homes in droves, rushed to Kuwait in HOPES of one day getting the all mighty citizenship. In the meantime, they've given up their right to birth certificates, death certificates, marriage certificates, passports, medical care, education, drivers licenses (previously), or even to be a documented human being! Yes, that MUST be it. The Kuwaiti citizenship was oh so valuable people gave up their basic human rights hoping one day, decades or even centuries later, they too could hold the blue passport! GIVE ME A BREAK!

Now, if the government wants to stand by that obtuse mentality and believe more than 3/4 of the Bedoun slithered into Kuwait hoping it was the pot of gold at the end of the rainbow... fine, not a problem. But resolve the issue by at LEAST providing their basic human rights -- which Kuwait is legally bound to since they did sign the International Human Rights treaty. Forget citizenship and those few KD every month. But give these people proper legal documentation, the right to travel, to own a home, etc. It's in the benefit of Kuwait to do this! Let these people work legally! Where do you think they're going to spend their money? Right here in Kuwait... allowing the economy to flourish.

As for all that 'Kuwait is going to do this, and do that' stuff... when? Those old promises have been broken over and over and over.

How do the other GCC countries resolve their stateless issue? They granted them citizenship. That's how. Google it in Bahrain, Qatar, and the UAE as well. In some cases it's a 'lower' level citizenship with limited benefits, but it does allow them their basic human rights.

Oh the silly stories being fed into some people. The Bedoun situation is turning into a Mother Goose fairy tale; shared by generations but never really the whole truth.

I love your simple, direct and honest approach to the situation. And completely true. Your last paragraph sums it up. Divide and conquer my friends is the policy.

The whole issue of Bedouns "sneaking" into Kuwait somehow to gain Kuwaiti citizenship has only come up as a mainstream idea in the past few years; being spoon-fed to most (normally rationally thinking) Kuwaitis as the truth.

Further to your comment about how do other countries solve the problem: At some point, the UAE offered Emirati citizenship to Kuwaiti Bedoon and the authorities here declined the offer.

Well actually, I'm a Kuwaiti and I'm not under the impression that Bedouns stuck into this country in hopes of one day getting citizneship.

It is a quite well known fact among Kuwait's native Shia Muslim population that Bedoons are natives from various Arab countries who have who were never granted citizenship because the majority are Shia. The government only grants the Sunni Bedoons citizenship. They don't want to become another 'Bahrain', so the government will pretty much never grand Shia Bedoons citizenship. Many Bedoons are now pretending to be Sunni in hopes of getting citizenship. It's a sectarian issue, the governments fears that the number of Kuwaiti Shia rises, the last thing they want is 100,000 more Shia citizens.

More than half of Kuwait's Bedoons are Shia (about 70% are Shia), and yet the government usually only grants citizenship to Sunni Bedoon families.

In special cases (Gulf War martyrs and intellectuals), the Shia Bedoons are given citizenship but it is quite rare at this point.

So where exactly did all these people come from then? And I ask out of sheer ignorance, not malice.