The Lack of Marketing for Hala February Pisses Me Off

If Kuwait has a 20-year tourism plan, how can they ever execute it if they can’t even run a proper tourism website? (Hey, for that matter, do a search on "Kuwait Tourism Board" and see what you get.) 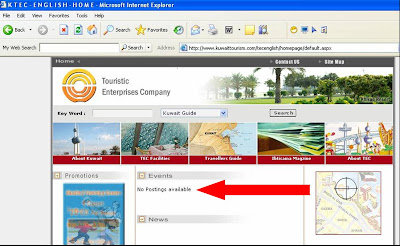 This month, Hala February is a prime example. With all due respect to Mohammed Al-Asousi, “PR Manager” of the Hala February Festival 2008, Dude – where is the PR?

Perhaps some of us who are residents/expats in Kuwait would like to invite people to Hala February – IF we knew what the heck was going on! Perhaps we could add to the economy of the country where we live. Perhaps we, as residents of Kuwait, would like to know where/when a concert or an event will take place in our own backyard!

I live in Salmiya and scour the internet on a daily basis. I read the Arab Times, the Kuwait Times and The Daily Star (although all I’ve been receiving for the past month + has been the IHT and nothing local). I keep pretty well informed about local events. I live in the middle of Salmiya. And yet, have I heard much about Hala February? No. If I hadn’t noticed an influx of Saudi and Qatari license plates recently, I wouldn’t even have thought about Hala February (you know…. “Oh My God – why are there all these Saudis here?”)

I did a Google search of Hala February and on the 2nd page of listings, came across a post on Fonzation’s blog that has a link to the official Hala February website. (Hala dudes, have you not heard of adding your site to search engines or perhaps even Google optimization?). OMG! Plus (and this is very funny), the website provides information from the 2007 Hala February. Chellooooo….

Where is the marketing? Am I missing something? Is the advertising/marketing of this event so much better in Arabic? Where is the schedule of events?
The Arab Times, which I feel usually does a great job of announcing events, doesn't have Hala February listed in their "What's on" pages. What about a schedule of events to run the entire duration of the Hala month? What they do have is pictures of the events that have just passed.... gee, thanks. Mighta wanted to go to that....
Disgraceful. I find it offensive when people outside of Kuwait laugh at "my" country. At the same time, I am laughing right along with them because I know it is true. Go ahead, do a search for Hala February and see what you come up with: Little, not a lot, and a whole lot about nothing. Tourism people: Hire an experienced, global PR firm! It doesn't even matter what the content of the events are: Marketing/propaganda is everything. Hire the right guys and sell ice to Eskimos; Sand to Arabs....
The fundamentalist MPs can bitch for a month in the (often international) media about how terrible Valentine's Day is and how it should be banned. And yet when it comes to the positive marketing of their own resources - where are they? Can't they take the time to promote the transformation of the economy of their own country, through positive activities? Perhaps conducting cultural or religious events in conjunction with the others - showing Kuwait's traditions, hospitality, and beliefs in a productive and positive manner? Kuwait has a month out of the year in which it can attract visitors from all over the world.... So is it a time to stagnate much or what?
And speaking of stagnation....

The Future of tourism in Kuwait:

November 9, 2006: Government looks to step up sector. The tourism industry is key in terms of diversifying Kuwait’s economy and new projects aim to develop long-term plans

Spicing Things Up (Article): The government launched a 20-year tourism plan in 2005. The plan was developed in conjunction with the United Nations World Tourism Organisation and the United Nations Development Programme. The primary objective is to help Kuwait diversify its national income. The country's first priority is to improve domestic tourism, by providing weekend breaks in resorts that can offer the same quality as their equivalents in Saudi Arabia, before turning its attention to positioning itself as a GCC tourist destination, targeting markets such as Bahrain, Oman, Qatar, Saudi Arabia and the UAE.

Hi Desert Girl,
we also try to find reliable information source on Kuwaiti concerts or other programs but no luck so far...
If you find something please post it in your blog.
Thank you,
Tamas & Jasminka

Yeah that makes a lot of sense.. am running couple websites & there is part of the website where I keep updating local events for people interested to go..

any who, there is not a single event I managed to find properly on time. sometime i would post event on the same day its will go on..

I believe this kind of things will never be brought up by the gov properly and must be done through the people. so, far I was able to get hooked up on like 3 events from Hala Febrayr but it was such an embarrassment when people from my site showed up & it was cancelled.

See this for example, kwtblog.com i had a post about flying the largest kite in the world. & it was planned on at 10AM for some reason they decided to go ahead and start at 8AM..

Am teaming up a network of people working in different places so we can feed kwtblog with the latest news and events.

Hoping for the best here,

haha, yeah.. i know how you feel... bahrain supposedly had a summer festival a few years ago. one, it wasnt executed properly, two, it had no marketing, three, even the people who came for it had no idea where/what it was. ridiculous. thats what happens when you put a bunch of incompetent idiots in high places just because theyre your cousin/brother/friend etc rather than people who know how to come up with something useful for the country

I frequently read your posts and enjoy them a lot as they give a good insight on life in Kuwait in general.

I could not agree with you more that the "lack of marketing" problem as regards the Hala February needs to be solved - in the interest of both Kuwaitis and foreigners. As far as I am concerned, the lack of marketing for events such as these and concerts in general (even concerts hosting very famous artists such as Amr Diab) is a common trend throughout the Arab world. I am a German citizen and I frequently travel to Kuwait and Cairo and love both dearly, and since I am not there that often, I find it extremely difficult to find information on events such as these, even on the internet.

It would be great if someone came up with a website that solely caters for such events and concerts taking place throughout the Arab world, with reliable tour dates and event information, but I believe to set this up would require a lot of networking and juggling back and forth in order to keep things up to date.

Let's all keep our fingers crossed that someone would go ahead and set up a website such as this.