The “Sushi Pride Club” sponsored by our very own Purgy invited me to a sushi challenge last night at Edo. I do admit that the food was very good and the company couldn’t have been better. I knew the ladies present (one better than the other) and it was nice to catch up with them. Purg is definitely NOT a limp-wristed sushi eater (nor are any of his studly crew!). Seriously nice guys. I don’t know what I was expecting, but I enjoyed myself more. Maybe I’ll catch up with them again. Anyhooo, I am back to Sakura maybe tonight or tomorrow. Sakura rules. No doubt about it in my mind. (NOTE: I am particularly prejudice because I am to Sakura what Norm is to Cheers - everybody knows me and it feels like home.) And I really like the 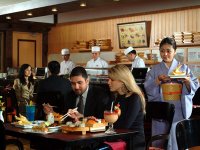 renovations. If you haven’t been there in a while – it is really pretty. Purgy said that the sushi in Sakura is too big and tasteless, but I’ve always found it to be flavorful, although I would like the pieces to be a little bit smaller – especially some of the rolls. Maybe I just have a bigger mouth than some people? Ha ha. I like Edo – especially for the ambiance (it kind of reminds me of a quiet jazz restaurant in DC). If I am in that area, I much prefer Villa Fairuz, however. Excellent chicken livers.

I had dinner on Wednesday night with Bunny. As fate would have it, we went down to the Blue Elephant – only to find that it was closed for a private party. We ended up at Thai Chi, which probably wasn’t a great choice on my part because Bunny has a slight hearing problem and the music was too loud. I really haven’t kept up with him for the past year, although we often talked. I stopped dropping my clothes off at his dry cleaners (for free) because I didn’t want to take advantage - although I adore the little guy who runs his shops – Mr. Mutu Laundryman (he calls himself that). In 2003 when Bunny was in Iraq, Mr. Mutu Laundryman used to call me, in tears (yes literally), because he was so worried about Bunny, and we hadn't heard any news in weeks. I reassured him that he was fine, and then I would get off the phone and cry. Anyhow, Bunny and I haven’t seen each other in ages: I felt bad because The Man was somewhat hurt that we were still friends (and I mean that – just friends), so I didn’t want to upset anyone; I can’t speak for anyone else’s behavior. Bunny is one of those people that if I needed something 10 years from now and called him, he would drive to me (DWB – Driving While Bedouin) at full speed. Anyhow, we’ll try to go to the Blue Elephant again, but I’ll call first this time.

The Psychic Bedu guy called me last night trying to be helpful (Bunny says it is the guy’s companion talking to my companion to find out what’s going on). Psychic Bedu guy is concerned, so he is working on it. He’s such a sweet heart. I love those kind of people; you never know when God is going to send you angels or in what form they are going to appear. Sushi angels, psychic angels, horse saving angels.

Oh yeah, I am trying to get some BIG sheikh assistance on the horse thing. Ya baad chebdi. I know you are busy, but dude – help a sister out. Actually, it isn’t for me, it is for the horses and you know that you love them. I will never ask for another favor (until next time). Tee hee. AGEC needs a good horse vet and those people need to be penalized for what they are doing to the horses. Seriously.

I’m watching boats pass by my office this morning at the port and wishing I could be outside playing. My friends have been begging me to go fishing for months and I just haven’t been in the mood (plus I have been really sick since the beginning of December and just now I’m better). My job is to call the fish. I don’t touch them and I don’t kill them. Yes, I do eat them, but that’s different (yes it is). Anyhoo, lately I’d rather be in the desert. Sushi in the desert would be ideal. Maybe I'll do that...
Posted by Desert Girl at 9:24 AM

Eating sushi in the desert!! Huh? why didn’t I think of that!!! It’s like eating Goat Mandy in the suite of Burj Al Arab.. ;P

I do not recall you showing up yesterday, we were dissapointed

Oh my God!!! Did you eat mendi in Burj Arab too???? I thought I was the only one!!! The last time, I had batcha in the jacuzzi there. Maybe I'll try machboos gerboah next time. Dhub.

Purgy - I was the sexy one.

hmm are you sure you sat at the right table? We always hear of another group that claims to be us and then people end up with them.