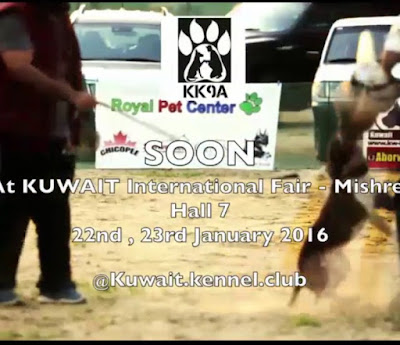 Alianz Kennel Club just held their outstanding dog show on the 11th and 12th of December.  It was very well organized and had several rings where different types of dog breeds and types were shown.  The show first place winner was a very good natured pittbull with a gorgeous shiny tan coat.

I have been meaning to write another post on the Alianz show but I just haven't had the time.  I will get to it because as a first-of-it's-kind show in Kuwait, I think it is important.  |I was very impressed.

I'm interested in the dog shows because of Mikey.  Mikey is a show line German Shepherd - as most of the dogs at the Alianz show were.

Here is a map of the show site: 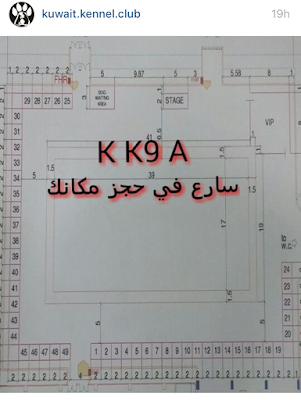 KK9A holds dog gatherings in Kabd near the police station (just off the side of the road) at approximately 3:00 to 5:00 PM every Friday.

Alianz holds dogs gatherings at Messila (next to the Messila Beach Club) every Saturday from 3:00 pm to 5:00 PM.

Both of the weekly gatherings are free and open to the public.  Bring a dog.  Bring a kid.

Hey Desert Girl, I sent you an email earlier looking for ideas on how to take care of a sweet stray near where I work. Please check your email and write back or call as you wish. Thanks. Merry Christmas.

Hi Hawk. I'm sorry but I didn't see your email. If you need help with a stray, please contact one of the animal rescue organizations in Kuwait: @kareq8 @kateuq8 @adopt_a_street_princess PAWS KSPATH

Hi I am looking to move to Kuwait with a large dog. Which areas in Kuwait can I rent a small villa or townhoise with a backyard?

Unknown - Please read my post about my list of favorite realtors. Get in touch with Thomas. He was great in finding me a large-dog-friendly place to live. It is VERY difficult. It is almost impossible without a realtor. Most places are not pet friendly. Small villas and townhouses are in various places in Kuwait. You're looking at least 1500KD/mo and up. Messila, Masayel, Egaila are the latest areas. Good luck!