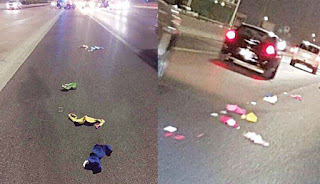 Many of them slowed down while some even stopped to check, which resulted in traffic congestion. When the Operations Room of Ministry of Interior received information about the presence of female underclothes on Sixth Ring Road, securitymen rushed to the location and removed them.

Investigations have been launched to find and arrest the suspect who threw the lingerie on the road.
– end –

Seriously??? Police have nothing better to do than to chase down a lingerie bandit?  You want "shock and awe" in Kuwait?  Throw us your panties.

And puhleeze - from the looks of it, these are "A cups".  Not even worthy of a mention.  You want to do something truly poetic, drop some DDs or larger.  Plenty of big girls around.  I didn't even see any leopard print in these photos and therefore, I am guessing that these were dropped by a teenaged expat.  Fer sure, not Kuwaiti.

(I can't help it.  I love the "Underwear in Kuwait" stories.  Like the many times that bandits hung undergarments from flagpoles and police searched for the suspects....)

The police will investigate a crime like this,but not any of the other trash strewn about. if you are involved in an accident good luck trying to get cops to investigate. I had a back window broken on my car thru vandalism by local Kuwaiti boys and after two days of runaround at two different police stations was told I would have to wait two to three months to get a police report so I can get the letter so my insurance an fix my window. A friend had his cousin (police officer) to get me a false report from a different precinct stating they were aware of the vandalism and that they gave permission to have my window fixed.

This story i came across on all social media including a instagram video about it. My first thoughts were some guy or girl getting upset with a lady/girlfriend/wife and getting their swimwear and throwing it in the middle of a highway from their car just to get revenge on them. I am not sure anyone will try to claim the clothes after the social media coverage it received. I am hoping the social media will mature up and balance out on all the news coverage.