I'm probably going to catch some crap for this post, but here goes....

One of my (former) friends broke up with her boyfriend recently.  She dumped him.  She was in a line of western girlfriends he's had before that also dumped him.

I didn't know him.  I met him once with my (former) friend and had a brief conversation; and saw him another time for maybe 3 minutes.  He approached me and I'm still not certain if he just wanted someone to talk to or because he was interested in me as the next stepping stone in a line of western girlfriends (does he think that we are "more open-minded?")   Anyways, we never went out. We just talked over the phone about his X and their relationshit.  He didn't have pleasant things to say about her.  The blame was shifted her way.

One of his first statements to me was, "She wasn't interested in true love."  Ah yes.  True love. Okay.

Why am I blogging about this?  Because I'm fascinated by people's perspectives.   I've also been through a similar scenario in the past with a former relationship where both of us thought it was "true love."  Since then, I've become older and wiser. (Not dissing true love - just how it comes to you, in which package, in which format...)  In a parallel universe where things were different and yes, ok...

And why the hey are they seeing "true love" when they are married?  Well, most (here) didn't marry for love.  They married by arrangement or to have kids or for some kind of deal.  The arrangement is keeps them married, "For the children" and all that.  (Well, married men are married men and want to have their cake and eat it to - in any continent in any country in any town.)

My POI (MPOI) shall remain nameless, but if you are a long-time reader, you can probably figure out who he is through my previous posts from years ago.  MPOI didn't sneak around.  He stated his intention to his whole family (and no, it is NOT Mr. Clean).  His first wife knew.  His kids knew (brave, strong, little people who sought me out to find out who I am).  His sisters knew.   And I met the whole crew.  I was his second wife (although not in court for several reasons - which is an entirely different post).   In Islam, men can have up to 4 wives as long as they treat them all equally (which I don't believe that any man can because the Holy Quran also states that we are all unique individuals, so how can we all be equal?).   I believe that MPOI is a stand-up guy.  He did what he believed was right and I respect him for that.  If it was right or wrong in reality is something that is subject to interpretation, but he believed what he was doing was right and there was no sneaking around.  When I met him, he told me he was married and he wasn't actively looking for a relationship with someone else.  He was honest (to everyone involved) and still is.  I love his family.  I love his kids.  I even have a fondness for #1 (wife).  She is a lot like me in many ways.  We got to be friends at one point.

Did it work out?  No.  Would I do it again?  No.  Would I recommend it for any of my friends?  Hell to tha NO.  It isn't something that I usually openly discuss; it is something to be embarrassed by. Several of my other western female friends (professional, educated, thinking women) have been married at times as second wives and they don't discuss it either for the same reasons; you are always second-best.  You will always be the side chick; legally or not.  The implication is that #2/3/4 has a lack of self-esteem or self-respect (which I don't believe to be the case, but I think most people judge it that way).

MPOI's #1 once asked me what I would do if MPOI married someone after me - or what would I do if I were in her shoes.  I said I would have divorced him.  If he's having a public long-term relationship with another woman (marriage or not), he shouldn't be with the first one.  He's looking for something that is lacking.  (Again, this is my perspective.)

So back to POI and his quest for real love. POI sneaks around.  He meets discreetly at GF's homes and seldom goes out in public to hide the relationship.  He makes excuses.  Dude!  You're not going to get it.  Especially with a single Western woman.  I don't think POI qualifies in the sugar daddy category.  Free meals at home once in a while maybe.  Maybe some trinkets.  But that's about it.  And only on his schedule.

Why would a woman want to be "committed" to someone who is already committed?  Love?  Yeah, ok.  Let's look at that argument.  What is a single western woman going to want from a love relationship:  a future with that person she loves.  She's going to want more.  And if she wants more (a commitment), it will likely be sooner, rather than later.  "Marry me or move on".  (and then IF you get to the point where you get married as a second wife, the reality hits you/novelty wears off and you want out).  POI Dude doesn't want to get married.  He wants to sneak around.  This translates to him getting dumped again and again.  (Don't get me wrong - I don't feel bad for him.  I am perplexed by his lack of understanding of it all and why he would be so arrogant as to believe that any woman would go along with his scheme.) 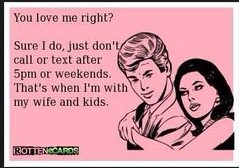 If he isn't going to follow through, POI should aim lower.  Start looking for someone from a similar background: local and married.  It's a win/win (actually, lose/lose in my viewpoint) situation:  They both have to go home to their partners.  They both have very limited free time.  They both will understand the need for no calls after a certain hour on certain days of the week.

But ultimately, POI shouldn't do it at all.  Taken is taken.  A guy who cheats on his wife is going to cheat on the next woman.  You're not helping your children by cheating on their mother or getting married to another woman.  They will know and the cycle will continue. (And having more than one wife is no walk in the park - it is WORK.)    You are only teaching them to accept being unhappy.  If you want true love, get divorced and go find it and commit to it.  Live.  Be happy.  Let  your wife live and be happy.  (How can you be her knight in shining armor when you're sneaking around?)

If it is true love - you will want to spend the rest of your life (and most of your time) with that person.  If not, you're just lying to yourself and no one else is to blame.
Posted by Desert Girl at 12:33 PM

I am in the process of a divorce due to my husband cheating on me with a married woman. Actually Kuwaiti women (even married) are cheating more and more. They do not hesitate to invade and destroy an entire family. And it seems within the society, no one says anything. People can be aware of cheaters and just keep their mouths shut about it. Kuwait's society is headed for destruction due to this escalating behavior and family breakdown. For anyone looking for support who has been cheated on or if they have cheated and are looking to fix their marriage they can contact affaircare@mail.com

I am in a polygamous marriage (an am technically? the first wife I guess, legally) and the second wife was my husband's wife before me.... lol. People shouldn't divorce if they don't think it through, serriously, to try to force other people into stuff. But there's a lot of honesty, friendship, and time shared between the three of us. That helps. No one is second, to his family, or to us three, although maybe society thinks differently. I've always been one for "screw society" though;). I think it is harder for my co-wife because she is Arab. People think, hey you're flawed because you and your husband divorced once.... When really, it is because they were emotionally immature but were forced into a very mature relationship really young, which is society's fault, not their's. And there's no such thing as "don't call after such and such time"... Time is divided fairly. Vacations are divided fairly. Presents are fair or the same (wish i was arab to enjoy this one---I just don't like gold or perfume or roses much lol).

I think men can be fair, because you can love different things about different people equally. Women can do this too although Islam puts more restrictions on us. Fairness means time, and spoken words and acts, and money, not the heart* islamically anyways. Someone is always going to be lacking. No one is perfect. Even four wives, none of them are going to fulfill everything all the time. That's life.
But it isn't for every one, and if a man can't even manage to be fair with his time and expectations with one woman, he'll never ever manage it with more than one****