Elephants and Cupcakes and Bronchitis... Oh My!

I haven't been writing a lot lately because I've been travelling and THEN I got sick with yet another lovely case of bronchitis.  It has left me a few pounds lighter with a very sexy voice (or so I've been told).

My life has been kind of a whirlwind since I left to go to DC for my birthday.  Lots of changes.  Lots of things going on.  Lots of positive things (no comment for those of you specifically interested in giving me the stink-eye).

I was in Dubai last week for the Arabian Travel Market show.  I loved ATM.  Great show.  The Dubai convention center is divided into different areas for different countries; some were quite elaborate.  Several booths had dancers and music.  Very cool.

When we drove into Dubai from the airport, I saw an elephant on a truck from the taxi.  You never know what you are going to see in Dubai and when I start seeing elephants, it is usually about 2:30 am after a whole lotta tequila shots.   Pero this time, I was stone cold sober. 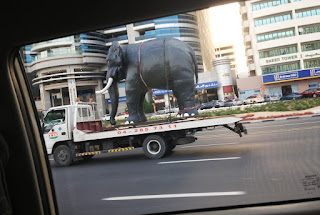 Later, at the show, I saw the same hephilump at the Sri Lanka podium.  How cool is that? 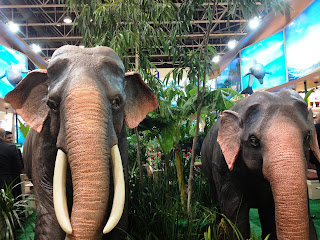 Etihad had the best marketing promo ever: to announce their new daily flights to my hometown, Washington, DC, Etihad set up a Georgetown Cupcake shop cafe (temporary bakery and cafe inside the convention hall!). Flight attendants were making and serving the cupcakes and coffee and ATM participants could (stand in a long line) sample them for free. If you've ever been to DC, you know about Georgetown Cupcakes. yummmmm.

We had a meeting at the Fairmont The Palms first, so I stayed there for a few nights.  NICE hotel.  Highly recommend it.  Then I moved to the Radisson Royal which was almost as nice.  Undoubtedly had better food; the Indo Thai restaurant was amazing.  Some of the best Pad Thai I've ever had (and the mojito was equally as good).

I got sick several days into the convention.  I distinctly recall one person coming up to our booth to discuss medical tours, coughing in my face and then walking away; as if he was drumming up new business.  Totally threw me.  Who DOES that?  Then I got sick and started popping antibiotics (Augmentin  available over-the-counter in most GCC countries, thank you very much!)  like M&M's.  Here I am, a full week later, just starting to recover.  It hasn't been cool with me.  Got off the plane and "A" took me to the hospital.  They put me on the nebulizer a few times a day and (get this..) Augmentin.  Nothing like self-medicating.

Soooo.... La Senza and I were just chatting and she said that she was just checking my blog. I feel kinda bad because it has been so long since I've posted anything.  I want to do a follow-up to a "Happy Times 3" post just for you, La Senza girl..... :)

Sure you don't have the SARS-like virus that is in Saudi Arabia? It is in Kuwait also, but the Kuwait government does not want to stir up panic so they are hiding it from the people - that is what the ER doctor told as every family member had this virus. It is an epidemic he also told me. So really take care, and if you really start feeling extra bad, you might want to visit the local hospital.