More info on the Jahra Fire 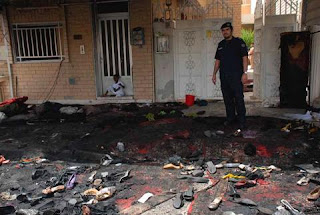 KUWAIT: A woman confessed yesterday to setting a wedding tent on fire in Jahra late on Saturday that killed 41 women and children and injured dozens others, some with critical burns. Sources said the suspect, who is the first wife of the bridegroom, was arrested after some maids claimed that they witnessed the woman setting the tent on fire with the help of kerosene-soaked rags. The bride escaped uninjured, but her mother and sister were killed, the sources added.

Meanwhile, the Amiri Diwan said yesterday that HH the Amir Sheikh Sabah Al-Ahmad Al-Sabah will not accept greetings on the occasion of the holy month of Ramadan in solidarity with the victims of the Jahra blaze. He also expressed his deepest sympathy with the victims and their families and ordered that every possible help should be given to the families. The Amir later chaired an extraordinary meeting of the Cabinet to discuss the fire incident. The Cabinet formed an inquiry committee headed by State Minister for Cabinet Affairs Roudhan Al-Roudhan to evaluate the incident, rescue operations and regulations needed to prevent such incidents from reoccurring.The Interior Ministry had earlier called on citizens not to erect tents in residential areas because that will obstruct rescue operations in case of emergencies. The ministry also set up a hotline for relatives of victims to make inquiries. The ministry also asked the families of victims to identify the bodies of the victims at the forensics department.

MPs meanwhile demanded an investigation into what they called government failure to respond quickly with some charging that the fatal incident showed that the government has no clear contingency plans. HH the Amir, the crown prince and the prime minister sent cables of condolences to the relatives of the victims, and the prime minister visited the wounded people at hospitals and assured that the government will take every necessary measure to provide all medical care to them.Head of the fire department General Jassem Al-Mansouri said that six of the victims were children and authorities had difficulty in identifying some of the totally charred bodies. He said the fire killed the 41 women and children in just three minutes, leaving behind shoes melted to the ground and bodies so blackened they were unrecognizable. Guests likely crushed one another in a desperate attempt to flee through the only exit, he said, adding that there were between 150 and 180 women and children insideat the time. The devastating fire was likely to result in restrictions on the tradition of holding celebrations in such tents, a custom which is rooted in Kuwait's nomadic heritage and endures in tribal areas of the country.It was a horrific scene with bodies and many shoes stuck to the ground at the only exit. They must have trampled over one another," Mansouri said. Authorities were using DNA tests to identify the 35 women and six children killed.
He expected tighter restrictions on the use of such tents. "There will certainly be a decision to ban the use of tents without written permission," he said. That would ensure that authorities are aware of events and able to check tents for safety features, he said.Some observers described the fire as the worst tragedy in Kuwait's modern history. Director of Jahra hospital Abdulaziz Al-Farhoud said that 90 people have been wounded in the blaze, some in critical condition with severe burns. He said 21 of the wounded women were sent to Babtain Burns Center for advanced treatment. A number of the wounded are still in intensive care units at several hospitals, Farhoud said.
.... called for holding accountable those responsible for any failure and urged the government to take the necessary measures to prevent fires at wedding parties from happening again.
... The fire left behind blackened mounds of chairs and tables burnt down to their metal frames, as well as food trays and charred air conditioners.
Posted by Desert Girl at 11:35 AM