One of my dear friend, American Girl in Kuwait, posted the following today and it mirrors my sentiments about Kuwait.  More needs to be done and unfortunately, it is taking foreign governments to draw the line.

If there's anything I learned while living in Kuwait, it's that change doesn't happen overnight. Or, even over decades. Sometimes it takes action outside of their control to force that change. Which is exactly what the Philippines has done; forced change. Bravo!

"Kuwait will always be a second home for me and will always have a special place in my heart. But serious changes need to take place in terms of human rights and animal rights. When an entire country can have a reputation for being cruel to people and animals, something is fundamentally wrong.

Fortunately, among some of the worst, are some of the best. There are people who step up and take on the issues head-on. They work tirelessly to make changes in Kuwait which is anything but easy.

Yeah, it's a little unfortunate someone has to write an op-ed telling people to be kind to those of different nationalities, but I applaud her for doing so."

This was in reaction to not only the ban, but to an article in the Kuwait Times, by a Kuwaiti woman; forward-thinking Nejoud Al-Yagout. 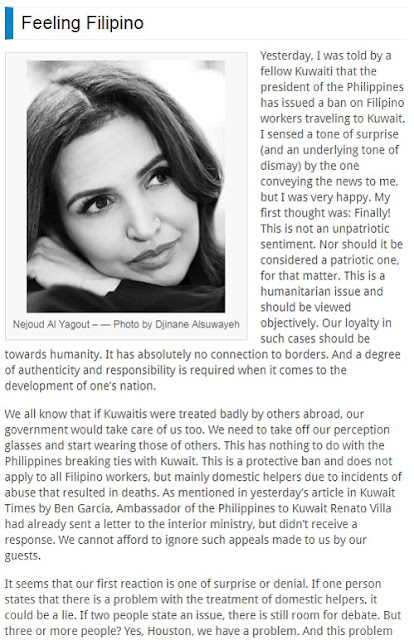 The full story can be found here:
http://news.kuwaittimes.net/website/feeling-filipino/.

I agree.  I think it has been a long time coming.  If Kuwaiti women were being raped and tortured in a specific country, they would immediately stop Kuwaiti women (and most likely men) from travelling there.  Over the decades that I've been in Kuwait, more cases are being prosecuted, but it isn't enough if it has become a culture of abuse.  It is common.  The stories continue and it is almost systematic.  The Philippines Embassy in Kuwait has become an abused women's shelter.  It can't be allowed to continue.

Well, Safa, you should be really happy about this!  Mabrook, boyfriend!  You wanted more expats out of the country and now you can wash your own dishes and clean your own toilets.  I'm so happy for your win.