Bahrain for the Weekend

Since I'm on a travel roll and in the mood to write, I am posting about this weekend's trip to Bahrain.


I've been to Bahrain a million times (as have a lot of my readers, I'm guessing), but more in the past than I have done in recent history.  The country has grown since then.  A LOT.  We were with friends with a rental car and they had been in Bahrain a few months before and stated, "I have to be careful on the roads because the traffic patterns change constantly and I can't remember where to go since last time I was here."  I remember hearing that from Emiratis when returning from school to their own country;  blink, and it changes.  I was totally confused in Bahrain and even the taxi drivers didn't know some of the new places we wanted to go.

If you haven't been to Bahrain before, I'm going to give newbies some brief tips on what to do, where to go, etc.

Most nationalities can get visas at the airport or now online prior to going.  Drinkers:  Once inside the airport, it is very important to remember to buy a couple of bottles at the duty free because you won't find liquor stores easily accessible in the city.  Alcohol is everywhere, but you can't buy bottles unless you're willing to pay a lot of money.

There is a hotel on every block, everywhere in Bahrain.  Tourism is big in Bahrain; especially on the weekends when people come across the causeway from Saudi Arabia (a 25-minute drive to Dahran).   I usually stay at the Juffair Grand because it is close to where I need to work in Bahrain.  It is an okay/clean/quiet 4-star hotel in the middle of Juffair and in walking distance to Katsuya Japanese restaurant where I had some of the best sushi I've had anywhere.  The hotel is also walking distance to Shebab Avenue ("The Guys' avenue) where there are many little restaurants, mostly frequented at night.  There are also little grocery stores...

Juffair Grand has a microwave and refrigerator in the rooms.  BFF wasn't too happy when I over-cooked (aka burned)  popcorn and we had to air out the room before the fire alarm went off.   (The room service biryani is outstanding - really well seasoned.)  Rooms come with buffet breakfast.

I wouldn't recommend Juffair Grand for nightlife (not my style).  They have Wranglers - which is a Texan off-take.  They've also got a sports bar called, Champs; Busters - a pizza place/nightclub;  Cloud 9 - a nightclub of sorts. If you really want to meet a pretty lady from the Philippines in a very tight, short dress - this is your place!   The US Navy base is right down the street so many visitors stay at the hotel.

You can find good hotel deals online.  Bandar Resort is really nice for the summer with water activities, but it is outside of the city a little.  Rotana rooms are sea-view and it has a nice pool. Ritz Carlton is also sea front with a nice beach (and Trader Vic's on the property). 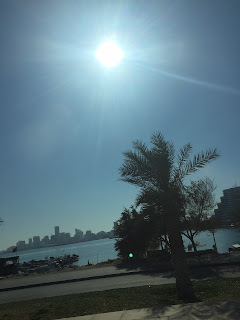 Most of the clubs are in Juffair and within walking distance of each other.  If  you want Arabic music (Gulf style), try Pulse.  360 is very large and plays mostly Western music. Ibrida in the Rami Hotel is supposed to be good, but we didn't make it there.  Clubs close at 2am all over Bahrain (and then you hit the Shebab Avenue in Juffair for 24 hour dining).  We started early at around 9:30 pm and by 11, there weren't any seats left.


We went to Bushido lounge in Seef area on a Friday night.  It is Budha Bar style and has a nice outdoor seating area.  They play great music, have outstanding sushi, drinks and ambiance.  The only thing that really messed it up was the service.  My recommendation:  Go to the bar.  I wanted to get my drink on and they forgot my order - twice.

Many places have Friday Brunch (most hotels have brochure stands).  We went to Coral Bay.  It's a Lebanese restaurant on the corniche, but has a seafood buffet.  You can sit outside overlooking the water.  It looks kind of weird/dumpy from the outside, but the inside is very pretty (we thought we were in the wrong place!)

If you want to shop, City Center Mall in Manama (there are 2 City Centers) is the biggest.  However, if you are coming from Kuwait, you are going to find that most of the shops there are the same.  Seef Mall is similar (but stop for lunch at Aroma Cafe with an outdoor seating area).  Bahrain Gate Mall is similar to Mubarakia (but not quite, with not as few shops and restaurants).  We found some souvenier bargains there and there is also a covered atrium area in the middle where you can have coffee and/or a light meal.

Restaurants:  My Bahraini friend recommends Adliya area and Zoe's (where you can lounge at the back for drinks and music), Barcelona with an open-air areas, and Mirai for sushi.  Senior Paco's Mexican restaurant is also in Adliya (which is well known to the expat community for great margaritas and live music).

So once you're done with your weekend, it is good to know that there is an Irish pub in the airport for that last-minute fix before you return.  Hope you enjoy your trip. 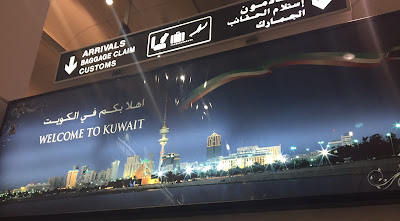 Nice post! Thanks for sharing Best Restaurant in Bahrain